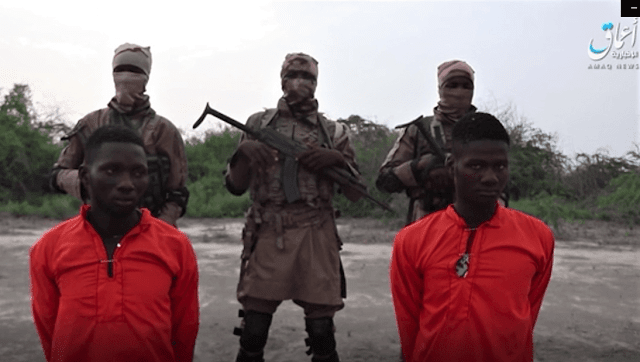 Christianpost reports that theIslamic extremist group Boko Haram has released a video in which its militants executed two Christian aid workers in Nigeria and vow to kill every believer they capture in the future.

According to Morning Star News, the terrorist group released the video last week on its official news agency site Amaq. In the video, Lawrence Duna Dacighir and Godfrey Ali Shikagham, both members of the Church of Christ in Nigeria (COCIN) in Plateau state, are shown kneeling while three masked, armed men stand behind them.

The two young men, who had gone to Maiduguri to help build shelters for people displaced by Islamic extremist violence, are then shot from behind. Speaking in the Hausa language, one terrorist states the group has vowed to kill every Christian they capture in revenge for Muslims killed in past religious conflicts in Nigeria.

Pastor Pofi, a cousin of the two executed Christians, told Morning Star News that the two men were captured by Boko Haram, now called the Islamic State in West Africa Province (ISWAP), as they carried out their work in a displaced persons camps.

“Lawrence and Godfrey left Abuja for Maiduguri in search of opportunities to utilize their skills for the betterment of humanity and paid with their lives,” Pofi said. “We will never get their corpses to bury. The community will have to make do with a makeshift memorial to these young lives cut short so horrifically.”

Pastor Pofi argued that if the federal government had created economic opportunities for those tempted to join extremist groups and had returned security to the country, the two Christian men would not be dead.

“We must ask ourselves if this is the kind of country we want where young men who are earning an honest living are brutally killed while those who abduct and kill others are invited to dialogue with government and paid handsomely,” he said.

In a letter to the United Nations secretary-general, Emmanuel Ogebe of the U.S.-Nigeria Law Group, a legal consulting firm with an emphasis on human rights, said the recent spate of murders amount to "ethnic cleansing."

“More executions of humanitarian workers could yet occur,” Ogebe wrote to the U.N.

Nigeria ranks as the 12th-worst nation in the world when it comes to Christian persecution. Boko Haram is one of the most violent terrorist groups in the world, wreaking havoc in Nigeria’s northeast and Lake Chad region. Over the last decade, the group has killed an estimated 35,000 civilians and displaced thousands more.

In July, Boko Haram splinter group ISWAP — a group that has ties to Islamic State terrorists — kidnapped six Christian aid workers from the humanitarian group Action Against Hunger. The group later released a video in which the captured aid workers begged the Nigerian government for help.

Last week, militants released a video of them beheading one of the abducted men and blaming the Nigerian government for deceiving them after months of negotiations. They have also said that if nothing is done, they will execute the other five captives as well.

“Action Against Hunger is extremely concerned and is fully mobilized to ensure that the remaining hostages can be quickly and safely reunited with their families.”

The news of the execution comes just days after Action Against Hunger was shut down in Nigeria after army bosses accused it of "aiding and abetting" terrorists in the country's war-torn northeast region, the BBC reported.

However, the group has denied the allegations, claiming it “delivers neutral, impartial, and independent humanitarian aid to millions of people in Borno and Yobe States by providing basic services to the most vulnerable people, especially women and children.”

“This decision, given without notice, has put into jeopardy the vital assistance that Action Against Hunger is providing to millions of people across Borno and Yobe States,” the group said on its website.

Earlier this month, two Action Against Hunger staff members were killed in an ambush in a refugee camp in the Gambella region of Ethiopia.
Edited from Christian Post By Leah MarieAnn Klett, Christian Post Reporter
Image Source: Morning Star News Screenshot
Posted by Jesus Caritas Est at 11:28 AM