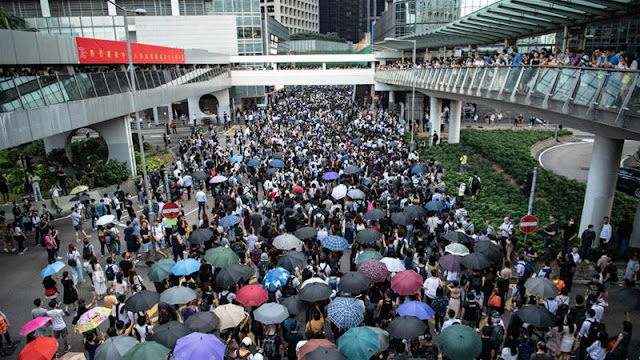 MTR, banks and stores stay closed as protests spread across Hong Kong
by Paul Wang
Yesterday, a plainclothes policeman shot a 14-year-old boy in the leg in Yuen Long. Radical protest groups attacked metro stations. Chinese banks and businesses that support the government have been attacked. Carrie Lam calls on the population to support the government and condemn violence. For Beijing, the anti-mask law is "absolutely necessary".

Yesterday, rallies were held across Hong Kong to protest against the emergency law that bans the wearing of masks in public meetings.

Although most demonstrations have been peaceful, acts of vandalism have occurred against branches of Chinese banks and businesses that support the government.

Yesterday in Yuen Long, a plainclothes policeman shot in the leg a 14-year-old boy who is now in stable conditions in Tuen Mun hospital.

For the anti-extradition bill movement, the anti-mask law a first step towards a state of emergency that would crush freedom of expression in Hong Kong.

For its part, the government continues to refuse the five demands put forward by protesters, such as an independent inquiry into police violence and a clear path to full democracy. To make their point, protesters have taken to raising their hands showing five fingers (pictured).

The MTR has been closed since yesterday and will remain so indefinitely. Radical groups have targeted its stations and ticket offices because the company that runs the system is believed to be working with police to stop the rallies by making it harder to move around.

In addition, protesters accuse the MTR of refusing to release security camera footage of police violence at the Prince Edward station on 31 July, in which they believe three people died, a claim the government has denied several times.

Following yesterday's clashes between police and protesters, which resulted in 31 people being hospitalised, Hong Kong’s Chief Executive, Carrie Lam went on television this morning to appeal to the population to support the government and condemn the violence.

The Office repeated the claim that, "under foreign intervention", a "colour revolution" was taking place, like those that hit Eastern Europe at the fall of the USSR and during the Arab spring.
FULL TEXT Release by AsiaNewsIT - Image Source: Google Images - Aljazeera
Posted by Jesus Caritas Est at 11:02 AM