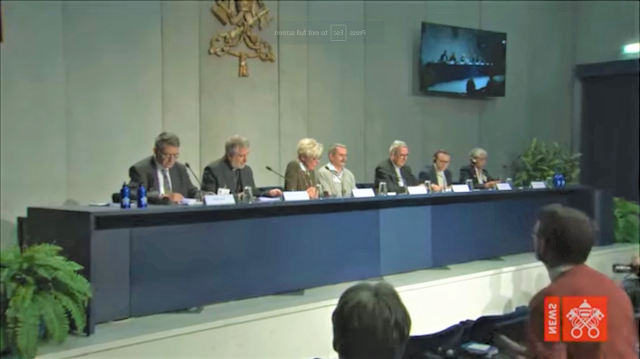 Amazon Synod Briefing: Forming a Church with an indigenous face
On Day 6 of the Synod for the Amazon, journalists and Synod participants gather in the Holy See Press Office to share impressions and answer questions concerning the main themes under discussion.
By Vatican News

The Saturday afternoon briefing concluded the first week of discussions on the Synod for the Amazon, and saw the participation of four speakers on the podium: two bishops, a woman religious, and a deacon.

Summary by Dr Paolo Ruffini
The Prefect of the Dicastery for Communications, Dr Paolo Ruffini, began by providing a summary of the themes discussed during the morning interventions. These included interreligious, ecumenical and intercultural dialogue, respect for cultures, and the rights of indigenous people to live their own lifestyle.

The Prefect cited words that had been recalled in one of the morning's interventions: those of Pope Saint John Paul II when he visited Manaus in 1991, regarding how the Church is always on the side of dignity and the right to life.

The role of women was another issue introduced several times in the Synod Hall on Saturday morning. The theme of religious life, especially that of women religious as leaders of Christian communities, was underlined. Here the Prefect referrted to a quote of Pope Saint Paul VI used in one of the interventions calling for women to have an influence on the life of the Church: something they are already doing in the Amazon Region, Dr Ruffini said.

Comments by Fr Giacomo Costa SJ
The Secretary of the Information Commission, Jesuit Fr Giacomo Costa, continued by explaining how participants returned to the Synod Hall on Saturday morning after their work in the “circoli minores”. He spoke of a convergence of paths towards an integral conversion beginning with the Gospel. He used the term “Samaritan Church” to describe a prophetic Church, in communion, and based on solidarity.

Other strong themes that emerged, said Fr Costa, were the importance of listening to the cries provoked by violence, being attentive to the dignity of workers, and to the question of youth unemployment. There are new forms of slavery that must be confronted, he added: forced employment, prostitution, and organ trafficking “must be addressed in a prophetic way”, he said.

Another theme was that of “integral education” capable of changing reality and helping us care for our common home. In order to have a Church “that can listen, and be listened to”, said Fr Costa, we need to train people to promote co-citizenship based on compassion, to contribute to the “buen vivir”, or well-being of all.

Sister Zully stressed how we all need to listen to the voice of God, the poor, creation, and the earth, that is coming to us from the Amazon. We must also be ready to acknowledge both our successes and our failures, she said.

Bishop Rafael Cob Garcia, Apostolic Vicar of Puyo (Ecuador)
According to Bishop Rafael Cob Garcia of Ecuador, the greatest challenge lies in the formation of priests and pastoral ministries. He recognized there are different needs, but he identified a common key to evangelization in the Amazon as being that understanding the local reality. The keyword, he said, is “inculturation”: in order to build a Church with an Amazonian and indigenous face, the Church must train local priests.

He spoke of the diaconate as a vocation and of the need to reflect on how the Church can be even more present in local communities.

He spoke of his own experience of providing formation for missionary leaders, education and training for priests to be missionary pastors.

The traditional seminary is not sufficient, he said: the local Church needs priests who come out of the communities. We need a theology that speaks to people of the presence of God and shows that presence, said Bishop Vasino.

A question about vocations
Bishop Rafael Cob Garcia chose to answer the first question regarding obstacles to vocations in the Amazon Region. The Bishop acknowledged that there are very few vocations. He offered one reason as being an imbalance between the academic quality of studies locally, as opposed to seminaries in the cities. Seminarians “get discouraged and leave”, he said.

Another reason, he suggested, is a “difficulty understanding disciplinary norms of Catholic Church, including celibacy”. This has an impact on many indigenous candidates, he added. Conditions in the Amazon are different, said Bishop Rafael Cob Garcia, which is why the Church needs to look at “new pathways”.

A question about syncretism
Bishop Adriano Ciocca Vasino chose to answer a question on how the Church discerns between authentic inculturation of the Gospel and syncretism, or the merging of beliefs. He stressed, first of all, the need to view things from the perspective of indigenous culture and, “after dialogue”, to see what coincides with the Gospel. We need to enter more deeply into their mentality, he said, understanding and respecting their culture, “the soul of their spirituality”.

A question about formation
Bishop Rafael Cob Garcia affirmed that the Church “can be served in different ways”, and that we need to consider this in terms of formation. Service, he said, is the “primary dimension”. The priest is there to serve the people, he said, but lay people too are “protagonists of evangelization”. Bishop Garcia suggested taking steps to encourage Church that is less clerical and more ministerial.

Deacon Francisco Andrade de Lima said that, during the process of listening that preceded this Synod, he came to realize that “the face of Amazon Church is also a female face”. Women ensure the faith remains alive in communities that receive ordained ministers once or twice a year, he said.

A question about protecting the Amazon
Answering a question about who has the responsibility to protect the Amazon, Bishop Adriano Ciocca Vasino affirmed that the sovereignty of the countries of the Amazon region is not in question. We do live in a globalized world, he added, which means we need to “go beyond populism” which is neither good for the Amazon, nor for the health of our planet.

A question about a Church with an Amazonian face
Bishop Adriano Ciocca Vasino responded to a journalist who wanted to know what changes should be made in order to form a Church with a more Amazonian face. The Bishop said he “dreams” of creating an Amazonian seminary in which to form people, “starting from their own realities”. This means providing local formation with local formators who understand the reality and know the language, he said.

The Church needs to pass from being one that visits areas, to one that it there permanently, he said. People want to be “supported and accompanied”, said Bishop Vasino, which means creating a presence, sharing their everyday lives, being involved, understanding their “signs and symbols”, what they feel and what they do. By way of solution, the Bishop suggested a specific formation for Amazonian priests that is more practical than academic.

Answering a follow-up question on the same topic, Bishop Adriano Ciocca Vasino identified two different models of formation and leadership: the traditional model of people coming forward, and that of selecting people who are already leaders in their communities, and providing them with further formation. The Bishop spoke of his own experience trying to discover how best to form priests destined to be missionaries in the Amazon. Theology in his school is open to both men and women, he said, but it begins with the local reality. After initial years of study, candidates are sent to work within an indigenous community for four years. If that community agrees they are suitable, they are ordained. The Bishop said there are women too who are training to become theologians. Should the Pope allow it, and if the local community requests it, he would ordain them deacons, said Bishop Vasino.

A question about a Synod on role of women in the Church
Dr Ruffini responded to a question regarding the possibility of a future Synod on the role of women in the Church. He explained the synodal procedure: how convergent themes are brought forward from the small group discussions and General Congregations, toward formulating a final document. Individual paragraphs of the Instrumentum Laboris are not being discussed as in the past, he explained. The discussion and sharing on the text is more in general and less structured. The dynamic in the groups is to put forward concerns or reflections. The moderator then selects which themes will be examined in the various sessions.

A question about evangelization
Another journalist asked why it was important to evangelize indigenous communities who already have their own beliefs. Bishop Rafael Cob Garcia responded acknowledging that indigenous communities do have their own spirituality, but that what Jesus came to proclaim is for the entire world, not just for certain peoples: “That they might have life and have it to the full”. But, when multinationals don’t respect their right, the Church also supports and protects these communities from the greed of others. Their land is not like “a cupboard you go to when you need something”, he said.

A question about ecological sins
Bishop Adriano Ciocca Vasino picked up on the term “ecological sins” used by Archbishop Pedro Brito Guimarâes of Palmas at Friday’s briefing. The Synod is an opportunity “to broaden the concept of Christian ethics”, he said, introducing sins against nature and the environment, developing an environmental anthropology according to which “everything is connected”. The Bishop said he hoped this could lead to a “change of mentality”. An incorporation of theology and ecology, he concluded, may also lead to changes in the Code of Canon Law. Full Text Source: VaticanNews.va
Posted by Jesus Caritas Est at 8:49 AM