Latest from the Amazon Synod : Pope Francis opens Discussions saying he was “sad to hear the mocking comments” made about the indigenous 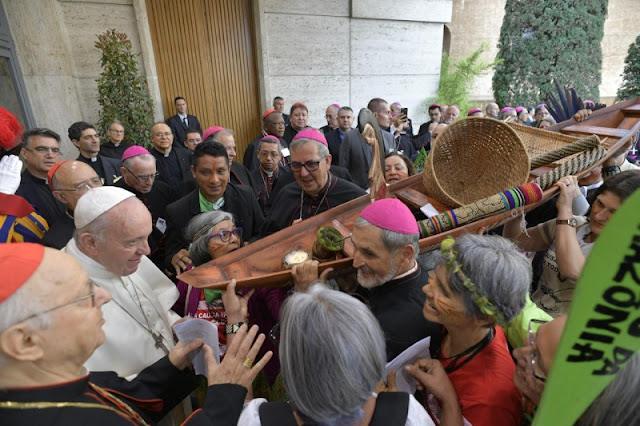 The Synod for the Amazon opened with a procession from St Peter’s Basilica, out into the Square, through the Arch of the Bells, and into the Synod Hall. There, Pope Francis opened the proceedings with a discourse in Spanish in which he spoke of the Synod as having four dimensions: pastoral, cultural, social, and ecological.

The pastoral dimension allows us to consider the people of the Amazon “respecting their history, cultures, and way of living”. Because all peoples, continued the Pope, “have their own wisdom, awareness, their way of feeling, of seeing reality”.

Ideological colonization
Pope Francis warned of the ideological colonization that reduces or destroys the characteristics of a people. “Ideologies lead us to exaggerate in our attempt to understand intellectually, but without accepting”, he added. We reduce reality to categories or “-isms”. These become slogans that prejudice the way we approach a people.

The Pope gave the example of "civilization and barbarism" which only serves, he said, “to divide and annihilate” by qualifying people and putting a distance between us.

Feathers vs birettas
Pope Francis said he was “sad to hear the mocking comments” made about the indigenous man who carried the offerings at the Synod’s Opening Mass in St Peter’s Basilica on Sunday. The comments were about the feathers the man wore on his head.

“Tell me”, challenged the Pope, “what difference is there between wearing feathers on his head and the biretta” (the three-cornered hat) used by some officials in Vatican Departments?

Pragmatic vs paradigmatic
Pope Francis also warned of “proposing purely pragmatic measures” when we ought to think “in a paradigmatic way”, a perspective “that is born from the reality of peoples”.

“We have not come here to invent programs of social development”, continued the Pope, aimed at keeping cultures in a museum. We are here, he said, “to contemplate, to understand, to serve the people”.

Humility and a sense of humour
Finally, Pope Francis urged participants to “reflect, dialogue, listen with humility… and speak with courage, with parrhesia”. To participate in the Synod is “to enter into a process”, he said, not just “to occupy space in the room”.

We need to be respectful, he added, and to be prudent in the way we communicate, not to spoil the Synod process by creating conflicting messages: “a Synod from the inside and a Synod from the outside”.

“And please”, concluded Pope Francis, “let's not lose our sense of humor”.