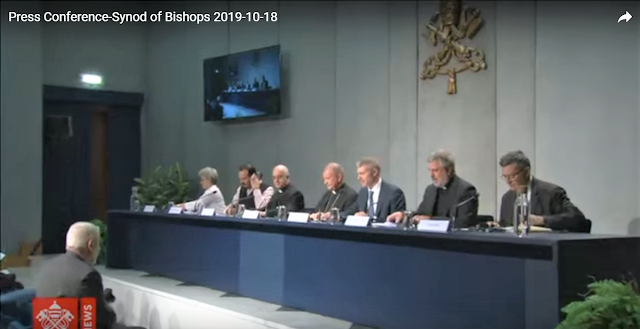 Amazon Synod Press Conference: Ecological conversion and God’s dream
(Image Source: Screen Shot - Youtube - VaticanMedia)
The Holy Press Office hosts a press conference on Friday during which four Synod participants share some of the issues that have emerged in the small working groups.
By Vatican News

Synod participants have been examining a variety of issues in their so-called “circuli minores”. They shared the fruit of their discussions at Friday’s press conference. But, as Jesuit Fr Giacomo Costa, Secretary of the Synod Information Commission, confirmed, the results of these discussions do not yet represent “the perspective of the Synod”. At this stage, he said, participants are still expressing their “personal thoughts and observations”, while the Synod continues to “consider everyone’s contribution”.

Renewing consecrated life
Sr Daniela Adriana Cannavina is Secretary General of CLAR in Colombia. She opened the press conference summarizing some of the proposals that emerged in her small working group. These include the need to renew and strengthen consecrated life in the Amazon Region. Religious men and women working in the region bring with them the “voice of experience with the indigenous people”, she said.

A Synod focusing on the Amazon has repercussions for the Universal Church, continued Sr Daniela. Which is why we need to “go beyond our fears and concerns, and make changes”, responding to the realities of the Amazon Region as “mystics and prophets”, she said.

Reconsidering structures
Sr Daniela said her working group discussed how it is time for consecrated men and women to “reconsider their structures”, if they are to move forward with “new missionary zeal”. She said her group stressed the need for “dialogue and shared responsibility” among pastors and laypeople. Moving “outside our comfort zones” and providing a strengthening presence “starting from our charisms”, was also emphasized, she said.

Regarding the role of women, Sr Daniela spoke of letting them take on certain pastoral ministries “in a responsible way”. Again she stressed “cooperation and co-responsibility” as a priority, clarifying this is not about “clericalism or power”. Religious life is about service, she said.


An Amazon Rite
Archbishop Rino Fisichella is President of the Pontifical Council for Promoting the New Evangelization. His intervention focused on the universality and complementarity of the Church. He described the Church as “one, but comprising many different people”. This is why it is important to respect all cultures and all peoples, he said, because “respect implies recognizing complementarity”.

No one culture can ever exhaust the richness of Christian reality, said Archbishop Fisichella. Every tradition and culture has something to say, “so that our common heritage can be interpreted”. In fact, we need to enhance certain elements of the Amazon cultures, he added.

In this respect, the Archbishop said his group proposed an “Amazon rite for the Amazon”. Indigenous people may live different cultures, he said, but they all have elements that communicate “the greatness of the Christian faith”. An Amazon rite means making expressions of the faith “visible and tangible”, according to the unique features of those cultures.

Paths of the martyrs
Bishop Mario Antonio da Silva, of Roraima in Brazil, described this Synod as “an opportunity to get in touch with life, forests, water, animals, minerals, but especially communities that are filled with wisdom”, and that already may have answers to many of the challenges in the Amazon Region.

The Synod is an opportunity for the whole Church to recognize paths already developed by the martyrs, he said, to listen to “the Christian communities crying out with their problems”. He identified migration as one of the major challenges in his region, saying that often this is coupled with a “humanitarian crisis”.

His small group has been “following a process of discernment”, continued Bishop da Silva, and has come up with proposals “calling for more responsibility”.

God’s dream
Mr Mauricio Lopez is Executive Secretary of REPAM (Red Eclesial Pan Amazònica). He began his presentation referencing the “contemplative element in Ignatian spirituality”, and inviting everyone present in the Holy See Press Office to observe a moment of silence, in order “to contemplate our reality and God’s vision of this reality”.

The periphery and the centre
This Synod for the Amazon is not the “periphery taking the place of the centre”, but the centre “being enlighted from the periphery”. Mr Lopez said not to be afraid, and not to lose sight of “the importance of people, their future and their hopes”.

He concluded with a call for three kinds of conversion: pastoral, ecological, and synodal. God is inviting us to be part of His project, said Mr Lopez, “to find meaning in life”.

Sr Daniela began by defining an ecological sin as anything that “excludes our indigenous brothers and sisters from their territories”, or “endangers their lives” because of the irreversible destruction caused by mining and oil companies.

Mauricio Lopez identified it as the “structural sin of inequality”: rights violations, land grabbing, the destruction of our common home. He cited the inequality of a world where a small group of people possesses 90%of all resources.

Archbishop Fisichella said ecological sin expresses itself “when human beings become individualistic”, when they fail to realize the value of “nature, creation, life, and relationships”. Sin occurs, he said, when we “erect barriers against God” and Creation, which is “a manifestation of God”.

Bishop da Silva said that, rather than a list of sins, he preferred to call attention to “concrete and sincere conversion”. Greed, profit, excess, all these contain “the DNA of evil and sin”, he said. But instead of “ecological sin” he said we should call for “ecological conversion”.

A question about funding
Bishop Mario Antonio da Silva responded to a question regarding funding from third parties that do not embrace the same values as the Catholic Church. He reaffirmed the Church’s commitment to defend life from birth to natural death. Specifying that all funding is used exclusively to “promote and develop life issues”, he listed “children, pregnant women, families, and the elderly” among its beneficiaries.

As Executive Secretary of REPAM, Mauricio Lopez clarified that his is “not an institution, but a network”, with no resources of its own. He called the Synod for the Amazon a “pro- life Synod that represents life itself”, as a process that seeks “to give meaning to life”.

The Prefect for the Dicastery for Communications, Dr Paolo Ruffini, added that money given to the Catholic Church is destined for charitable works, and that this is preferable to it being used for un-Chistlike purposes.

A question about ecological sins
Returning to the question of how the Synod for the Amazon can help bring the peripheries to the centre, Mauricio Lopez said the Amazon “can shake us and help us in positive way to be closer to God’s pro-life project”. This implies developing a more “global perspective”, he added. Scientific information tells us we must evaluate and take action in our present reality.