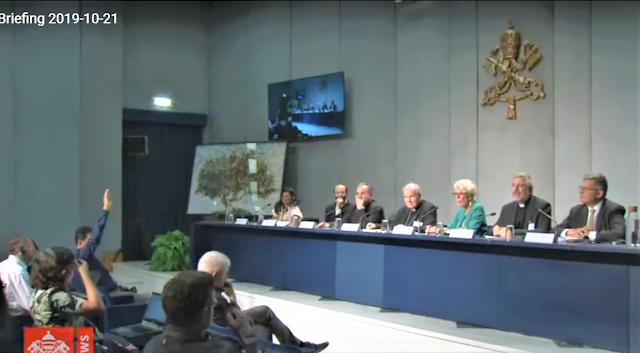 Amazon Synod: Presentation of the draft of the final document
The 14th General Congregation of the Special Assembly of the Synod of Bishops for the Pan-Amazon Region took place on the morning of Monday, 21 October, in the presence of Pope Francis. One hundred eighty-four Synod Fathers were in the Hall for the session. The Synod concludes on Sunday, 27 October.
By Vatican News

Cardinal Claudio Hummes, the Relator General, presented the draft of the final document of the Synod for the Amazon to participants in the Synod Hall on Monday morning. The text, which gathers together the fruits of the interventions presented during the work, will now go to the small groups for discussion in a “collective manner”.

The homily of Archbishop Héctor Cabrejos Vidarte
Monday’s session began as usual with Mid-Morning prayer of the Liturgy of the Hours. The homily was delivered by Archbishop Héctor Cabrejos Vidarte of Trujillo, Mexico, who also serves as President of CELAM (the Latin American Episcopal Council). He invited those present to look to the example of Saint Francis and his “Canticle of the Creatures”. “For St Francis”, Archbishop Trujillo said, “beauty is not a question of aesthetics, but of love, of fraternity at any cost, of grace at any cost”. The Saint of Assisi, he said, “embraces all creatures with a love and a devotion never seen, speaking to them of the Lord and exhorting them to praise Him. In this sense, Francis came to be the originator of the medieval sentiment for nature”.

To know, to recognise, restore
Archbishop Trujillo said that three words – “to know, to recognise, to restore” – have marked “the rhythm” of the spiritual journey of the Poor Man of Assisi; that is, to know the Supreme Good, to recognise his benefits, and render praise to Him. If for Saint Francis, sin is an appropriation “only of the will but also of the good” that the Lord works in human beings; praise, on the contrary, means restitution. “Human beings”, Archbishop Cabrejos Vidarte said, “are unable to praise God as they should, because sin has wounded the filial relationship” with the Lord.

The morning session was closed by a special guest who focused on the theme of integral ecology, particularly in relation to climate change. Full Text Source: VaticanNews.va