Pope Francis explains "...those in military service “custodians of the security and freedom of their people” to Military Chaplains - FULL TEXT 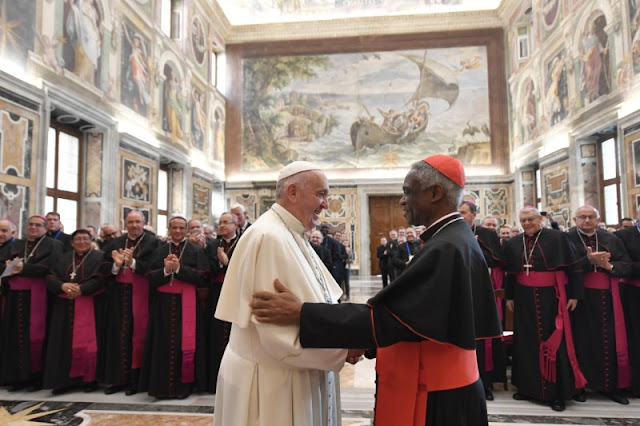 Dear Brothers and Sisters,
I offer you a warm welcome on the occasion of the Fifth International Course of Formation of Catholic Military Chaplains on International Humanitarian Law, dedicated to the theme “The Loss of Personal Freedom in the Context of Armed Conflicts: The Mission of the Military Chaplain”. I thank Cardinal Peter Turkson for his kind words offered in your name.
Four years ago, when I received the participants in the previous session of this course, I highlighted the need to reject the temptation of viewing the other as merely an enemy to be destroyed, and not as a person endowed with intrinsic dignity, created by God in his image. I also urged everyone never to tire of remembering that even amid the devastations of war and conflict every person is immensely holy.[1]
This encouragement, which I would renew today, becomes all the more significant in the case of persons deprived of personal freedom due to armed conflicts, since in addition to their vulnerability as prisoners, they are also in the hands of their adversaries. Often, persons detained in the context of armed conflicts are victims of violations of their fundamental rights. These violations include abuse, violence and various forms of torture and cruel treatment that are inhuman and degrading.
How many civilians, too, have been kidnapped, forcibly disappeared and killed! Among these, we can count numerous men and women religious of whom we hear nothing more, or who have given their lives for their consecration to God and their service to others, without favouritism or nationalistic bias.
I assure all these persons and their families of my prayers, that they may always have the courage to move forward and not lose hope.
International humanitarian law contains a number of provisions aimed at the protection of the dignity of detainees; this is especially the case in regard to the law governing international armed conflicts. The ethical foundation and crucial importance of these norms for safeguarding human dignity in the tragic context of armed conflicts means that they must be properly and rigorously respected and enforced. This also applies to encounters with detainees, independently of the nature and gravity of the crimes they may have committed. Respect for the dignity and physical integrity of the human person, in fact, cannot depend upon the actions they have done, but is a moral duty to which every person and every authority is called.
Dear Ordinaries and military chaplains: as you carry out your mission to form the consciences of the members of the armed forces, I encourage you to spare no effort to enable the norms of international humanitarian law to be accepted in the hearts of those entrusted to your pastoral care. Let yourselves be guided by the words of the Gospel: “I was in prison and you came to me” (Mt 25:36).
This means assisting the particular portion of the People of God entrusted to your care to identify those elements of the common patrimony of humanity, based on the natural law, that can become a bridge and a platform of encounter with everyone. The servants of Christ in the military world are also the first to be at the service of men and women and of their fundamental rights. I think of those among you who are close to military personnel in situations of international conflict; you are called to open their consciences to that universal love which brings one person closer to another, no matter what the other’s race, nationality, culture or religion may be.
But even before this, something else is required: an educational effort alongside that of families and Christian communities. This involves instilling the values of friendship, understanding, tolerance, goodness, and respect for all persons. It means forming young people who are sensitive to other cultures and their richness and committed to a global citizenship, in order to promote the growth of the one great human family. The Second Vatican Council calls those in military service “custodians of the security and freedom of their people” (Gaudium et Spes, 79). You are in their midst so that those words, which war contradicts and nullifies, can become a reality, so that they can give meaning to the lives of so many, both young and not so young, who, as military personnel, do not want to be robbed of human and Christian values.
Dear brothers and sisters, on 12 August 1949, the Geneva Convention Relative to the Protection of Civilian Persons in Time of War was signed. On this, its seventieth anniversary, I want to reaffirm the importance the Holy See gives to international humanitarian law and to express the hope that its norms will be respected in every circumstance. The latter should be further clarified and reinforced where appropriate, especially with regard to non-international armed conflicts, and in particular with regard to the protection of persons deprived of freedom because of these conflicts.
I assure you that the Holy See will continue to make its contribution in discussions and negotiations within the family of nations. I entrust you to the intercession of the Blessed Virgin Mary, Mother of Mercy, and I impart my heartfelt blessing to you and your loved ones. And I ask you please to pray for me. Thank you!

Posted by Jesus Caritas Est at 9:08 AM