Pope Francis opens Amazon Synod saying "The Holy Spirit is the main actor of the synod...let's not throw it out of the room." Full Text 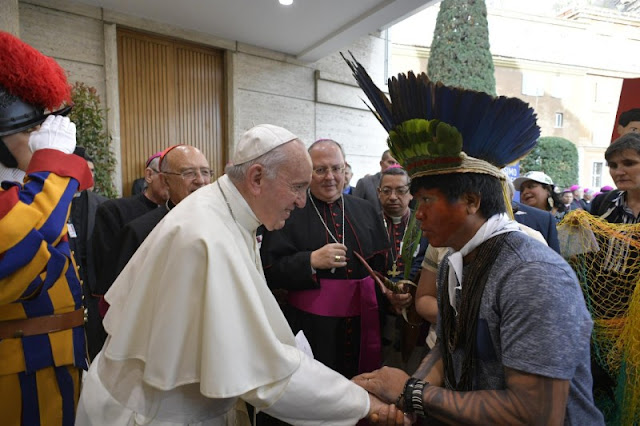 GREETING OF THE HOLY FATHER FRANCISCO

Welcome and thank you for your preparatory work: everyone has worked hard, from that moment in Puerto Maldonado until today. Thank you.

The Synod ... I'm going to speak in Spanish, better.

The Synod for the Amazon can say that it has four dimensions: the pastoral dimension, the cultural dimension, the social dimension and the ecological dimension. The first, the pastoral dimension is the essential one, which encompasses everything. We approach with a Christian heart and see the reality of the Amazon with the eyes of a disciple to understand and interpret it with the eyes of a disciple, because there are no neutral hermeneutics, aseptic hermeneutics, they are always conditioned by a previous option, our previous option is that of disciples. And also with the eyes of missionaries, because the love that the Holy Spirit put in us drives us to the announcement of Jesus Christ; An announcement - we all know - that it is not to be confused with proselytism, but we approach to consider the Amazonian reality, with this pastoral heart, with the eyes of disciples and missionaries because the announcement of the Lord rushes us. And we also approach the Amazonian peoples on tiptoe, respecting their history, their cultures, their style of good living, in the etymological sense of the word, not in the social sense that we give them so many times, because the towns have an entity own, all peoples have their own wisdom, self-awareness, peoples have a feeling, a way of seeing reality, a history, a hermeneutic and tend to be protagonists of their own history with these things, with these qualities. And we approach alien to ideological colonizations that destroy or reduce the idiosyncrasies of the peoples. Today is so common this ideological colonization. And we approach without the entrepreneurial eagerness to make preconditioned programs, to "discipline" the Amazonian peoples, to discipline their history, their culture; not that, that desire to domesticate native peoples. When the Church forgot about this, how it has to approach a people, it was not inculturized; I even underestimate certain peoples. And how many failures we regret today. Think of De Nobile in India, Ricci in China and many others. The "homogenizing" and "homogenizing" centralism did not reveal the authenticity of the culture of the peoples.
Ideologies are a dangerous weapon, we always tend to grab an ideology to interpret a people. Ideologies are reductive, and lead us to exaggeration in our claim to understand intellectually, but without accepting, understanding without admiring, understanding without assuming, and then reality is received in categories, the most common are the categories of "isms." So when we have to get closer to the reality of some native people, we talk about indigenisms, and when we want to give them a clue to their better life, we don't ask them, we talk about developmentalism. These "isms" reformulate life from the enlightened and enlightened laboratory. They are slogans that are taking root and program the approach to the original peoples. In our country, a motto: "civilization and barbarism" served to divide, to annihilate and reached the summit, towards the end of the 80s, to annihilate most of the original peoples, because they were "barbarism" and "civilization" came on the other side It is the contempt of the people and - I go to the experience of my land - that, "civilization and barbarism", which served to annihilate peoples, is still in my homeland, with offensive words, and then we speak of second degree civilization, those who come from barbarism; and today they are the “little balls, the Paraguayans, the umbrellas, the little black heads”, always that move away from the reality of a town qualifying it and putting distances. That is the experience of my country. And then the contempt. Yesterday I was very sad to hear in here a mocking comment about that godly lord who carried the offerings with feathers on his head, tell me: What is the difference between wearing feathers on the head and the "tricorn" used by some officers of our dicasteries? Then we run the risk of proposing simply pragmatic measures, when, on the contrary, we are asked to contemplate the peoples, a capacity for admiration, to make them think paradigmically. If anyone comes with pragmatic intentions, pray the “sinful self”, turn and open your heart to a paradigmatic perspective that is born from the reality of the peoples.

We have not come here to invent programs of social development or custody of cultures, of the museum type, or of pastoral actions with the same non-contemplative style with which the actions of the opposite sign are being carried out: deforestation, standardization, exploitation. They also do programs that do not respect poetry - I allow myself the word - the reality of the peoples that is sovereign. We also have to take care of worldliness in the way of demanding points of view, changes in the organization. Worldliness always infiltrates us and keeps us from the poetry of the people. We come to contemplate, to understand, to serve the peoples; and we do it along a synodal path, we do it in synod, not in round tables, not in conferences or in subsequent discussions; We do it in synod, because a synod is not a parliament, it is not a parlor, it is not to show who has more power over the media and who has more power between the networks to impose any idea or any plan. This would form a congregationalist Church, if we intend to search through the polls who has a majority. Or a sensationalist Church so far away, so distant from our Holy Mother the Catholic Church, or as St. Ignatius liked to say: "our Holy Mother the hierarchical Church." Synod is to walk together under the inspiration and guidance of the Holy Spirit. The Holy Spirit is the main actor of the synod. Please, let's not throw it out of the room. Consultations were made, discussed in the Episcopal Conferences, in the Presinodal Council, the Instrumentum laboris was elaborated which, as you know, is a martyr text, destined to be destroyed, because it is the starting point for what the Spirit will do in we and, now, walk us under the guidance of the Holy Spirit. Now we must let the Holy Spirit express itself in this Assembly, express among us, express with us, through us and express "despite" us, despite our resistance, it is normal that there are, because The Christian's life is like that.

And then, what will be our work here to ensure that this presence of the Holy Spirit is fruitful? First of all, pray. Sisters and brothers: I ask you to pray a lot. Reflect, dialogue, listen with humility, knowing that I do not know everything. And speak with courage, with parrhesia, even if I have to go ashamed, say what I feel, discern and, all this inside, guarding the fraternity that must exist here inside. And to favor this attitude of reflection, prayer, discernment, of listening with humility and speaking with courage. After four interventions we will have a space of four minutes of silence. Someone said: "It is dangerous, Father, because they are going to sleep." The Synod's experience of young people, that we did the same, was rather the opposite, that they tended to fall asleep during the interventions, at least some of them, and they would wake up in silence. Finally, to be in the synod is to be encouraged to enter a process. It is not occupying a space in the room. Enter a process. And ecclesial processes have a need. They need to be guarded, cared for, like the baby, accompanied at the beginning. Care with delicacy. They need warmth of community, they need warmth from Mother Church. An ecclesial process grows like this. Therefore, the attitude of respect, of taking care of the fraternal atmosphere, the air of intimacy is important. And it's about not venting everything, as it comes, outside. But it is not about those who must inform of a secret more typical of the lodges than of the ecclesial community, but of delicacy and prudence in the communication that we will do outside. And this need to communicate out to so many people who want to know, to our brothers, journalists, who have the vocation to serve to be known, and to help this, press services, briefings, etc. are provided.

But, a process like that of a synod can be ruined a bit if I leave what I think, I say mine, and then there is that characteristic that was seen in some synods: the synod inside and the synod from outside. The synod inside that follows a path of Mother Church, of care of the processes and the synod of the outside that, by information given with lightness, given with imprudence, moves informants ex officio to mistakes. Thank you for what you are doing, thank you for praying for each other, and encouragement. And please, let's not lose our sense of humor.
Source: http://w2.vatican.va/content/francesco/es/speeches/2019/october/documents/papa-francesco_20191007_apertura-sinodo.html - Image Source: Vatican.va
Posted by Jesus Caritas Est at 11:39 AM