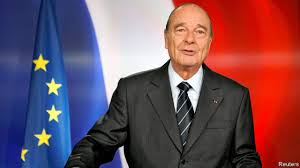 Pope’s condolence for death of former French president Chirac
In a telegram to French President, Emmanuel Macron, Pope Francis expresses his condolence for the death of former French President Jacques Chirac, who passed away in his home in Paris on 26 September, at the age of 86.
By Robin Gomes
“Having learned of the death of Mr. Jacques Chirac, former President of the French Republic, I would like to express my deepest condolences to you, the Government and the entire French people,” Pope Francis wrote in the telegram.   “I fervently pray to the Lord that He may welcome the deceased into His peace assure the comfort of hope to all those mourning his death, especially his wife and family,” the Pope wrote, imparting his blessing on France and its people.

Condolence of French bishops
The French bishops have also expressed their condolence for the death of Chirac.  In a message to Mrs. Chirac and her family, the president of the Bishops’ Conference of France, Archbishop Éric de Moulins-Beaufort of Reims wrote that the former president has left his mark on the French people with his energy, his style for human contact and his ability to deal with problems.

Beyond his political record, in his long career, he embodied, in a singular way, a particular French attitude to the challenges created by the economic crisis, the transformations of the world before and after 1989, in Europe and on the other continents and the social choices made possible and necessary by technological developments.

The bishops said they will participate in the funeral, embracing his family and all the French people, remember his generous service to the country and entrust him to the light of the merciful God who sees the depths of hearts. Full Text Source: VaticanNews.va
Image Source: Google Images
Posted by Jesus Caritas Est at 8:30 AM