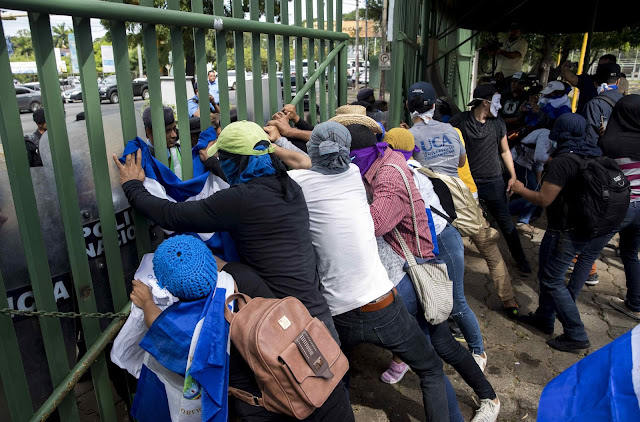 Father Rodolfo López, vicar of the Managua Cathedral was beaten and slapped by Sandinista mobs who took the cathedral from early hours to prevent the hunger strike carried out by mothers of political prisoners.
Source: https://100noticias.com.ni/nacionales/96744-nicaragua-policia-iglesia-catolica-presos-politico/
CNS (excerpt) reports:

Independent media reported police stood by idly as the mob moved into the cathedral, where the mothers of political prisoners were carrying out a hunger strike as part of a campaign to have their children released for Christmas.
Videos subsequently uploaded to social media show screaming protesters swarming the cathedral vicar, Father Rodolfo Lopez, and later pummeling him. The nine hunger strikers inside the cathedral were forced to relocate, according to press reports.
An Archdiocese of Managua statement issued Nov. 18 after the incident said Father Lopez and Sister Arelys Guzman, the cathedral administrator, "are fine, but had to leave the church to protect themselves."
López was rammed by more than 10 supporters of the Murillo ortega regime.


The Archdiocese released a Plea for Action from the Government and asks for Prayer
See: http://curiamanagua.org/comunicados/notadeprensasobrecatedral181119.pdf
Here is an excerpt:
We ask the President of the Republic Mr. Daniel Ortega and the Vice President that
take immediate action so that all our Catholic temples are respected,
also to the National Police to withdraw their troops that besiege and intimidate the
Cathedral and our parishes.

We urge all our people to intensify the moments of prayer in front of
Jesus Sacramented and the Prayer of the Holy Rosary, asking for Peace in our country
"Our Strength is Prayer."
Image Source: Google Images - El Mundo

Posted by Jesus Caritas Est at 9:53 AM