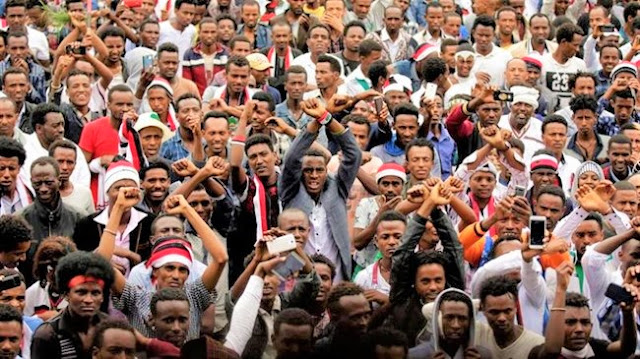 78 Dead in Ethnic and Political Protests in the Country
Latest News November 1, 2019

ADDIS ABABA, NOVEMBER 1, 2019 (CISA)-Over 400 people have been arrested in connection with the ongoing ethnic and political unrest that has left 78 people dead.

A statement released by the office of the Prime Minister on October 31 noted that the death toll has risen to 78 from the 67 that had been released by the police over last week.

“The latest information that I have in terms of perpetrators that have been apprehended is 409 individuals,” spokeswoman Billene Seyoum told the press.

Billene said the violence is the work of elements that oppose Abiy’s reform agenda, which includes freeing political prisoners and creating a more open political environment.

She added that the protests are partly a backlash against plans to transform Ethiopia’s ruling coalition, which has been in power for nearly three decades, into a single political party.

Protests against Prime Minister Abiy Ahmed erupted in Addis Ababa and in Ethiopia’s Oromia region on Wednesday, October 23 after an activist, Jawar Mohammed accused security forces of trying to organise an attack against him, a claim police denied.

Supporters of Jawar took to the streets last week to protest against his treatment after he said police had surrounded his home in Addis Ababa and tried to withdraw his government security detail.

Crowds of young men from his Oromo ethnic group turned their anger against, Abiy, also an Oromo, saying that he had betrayed them by mistreating Jawar.

The protests came a day after the Prime Minister warned in Parliament that unidentified media owners were fomenting ethnic unrest.

Prime Minister Abiy Ahmed won the 2019 Nobel Peace Prize for his efforts to achieve peace with neighbouring Eritrea.
Above Full Text Report from CISA News Africa
**************
Vatican News.va (excerpt) reports that at the Angelus on Sunday, Pope Francis said he was “saddened” by news of “the violence” in Ethiopia, “which has among its victims Christians of the Ethiopian Orthodox Tewahado Church”. The Holy Father expressed his closeness to the Church and to its co-Patriarch and Catholicos, who he described “my dear brother Abune Mathias”. He asked for prayer “for all victims of violence” in Ethiopia. He then led those present in the recitation of the “Hail Mary” for that intention.
The Ethiopian Orthodox Tewahedo Church is the largest of the Oriental Orthodox Churches, with between 45 and 50 million adherents, mostly in Ethiopia. The Oriental Orthodox Churches are distinguished by their recognition of only the first three Ecumenical Councils.
Posted by Jesus Caritas Est at 10:10 AM