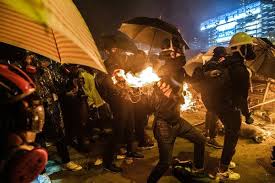 At least 100 demonstrators in the PolyU besieged by the Hong Kong police
by Paul Wang
They have no access to food or medicine. Parents kneel and beg police to let their children go free. Human chains to bring food to the besieged, stopped by the police. About 200 high school students taken out of university. At least 100 of them, 18 or older, have been arrested. The others will be arrested later. From tomorrow the schools reopen.

Hong Kong (AsiaNews) - At least 100 people from the anti-extradition movement are barricaded in the Polytechnic, besieged for the third day by the police. According to some parliamentarians, the young people cannot last long because they lack food and medicine and several of them are injured.

Since November 17, police have surrounded and penetrated some areas of the PolyU, using tear gas and rubber bullets and threatening the use of deadly weapons. The youth defended themselves with molotovs and stones.

The occupation of the PolyU, near the Harbor Tunnel, was to serve as a base for a global strike of the territory. The siege by the police stopped the project.

A large part of the population still supports young people. Yesterday several groups of parents went to beg the police to let their children go free, kneeling down before them. Other groups of elders who "protect Hong Kongs’ children" tried to enter the university, but were turned away by the police. The same happened for groups of thousands of people who in human chains tried to bring food for the besieged in PolyU. The police tried to stop them in Tsim Sha Tsui, Yau Ma Tei and Mong Kok.

Yesterday evening, the MP Ip Kin-yuen and some secondary school principals received permission to enter PolyU and escort outside about 200 junior high school students. The pact with the police was that all those under the age of 18 would not be arrested, but the police could incriminate them in the future. The other students 18 or older will be arrested. About 100 were arrested immediately; the minors were only registered.

In a press conference given this morning before the Executive Council, Carrie Lam, the chief executive, said that at least 600 people - 200 of them under the age of 18 - have left the university and about 100 are still trapped inside. Lam has asked for collaboration, "even from the rioters", to allow the siege end peacefully: the besieged must surrender themselves to the police together with their weapons.

Lam has also defended the "voluntary" work of the garrison of the People's Liberation Army which in recent days has "cleaned" the streets of the center. Although the work of the soldiers is against the Basic Law of Hong Kong - given that their intervention was not requested by the government of the territory - Lam asked the media not to "inflate the interpretations" on a gesture of simple help.

The Education Office has issued the warning that from tomorrow elementary and secondary schools will reopen their doors, after more than a week of closure, due to communication and transport disruptions.
FULL TEXT Source: AsiaNewsIT
Posted by Jesus Caritas Est at 9:04 AM