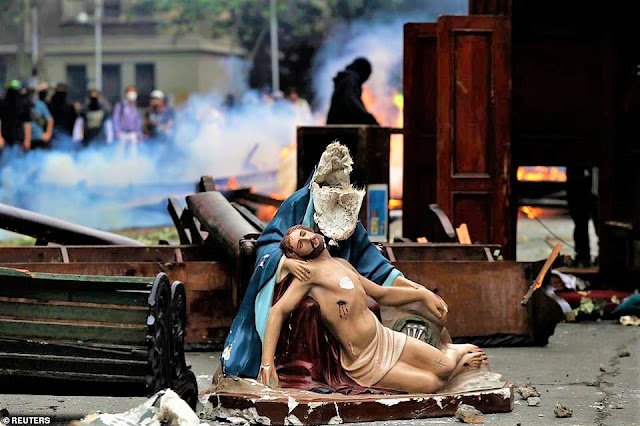 AMERICA/CHILE - Looted and desecrated places of worship, the Bishops ask to apply the law and rebuild the social fabric

Santiago (Agenzia Fides) - Solidarity with the Apostolic Administrator Mgr. Celestino Aós and all the faithful of the Archdiocese of Santiago after the looting and desecration of the parish of the Assumption of Mary, was expressed by the Standing Committee of the Bishops' Conference of Chile through a statement, dated November 9th, extending solidarity to communities and pastors "of other churches and places of prayer of different cults that were attacked in many cities". Hooded protesters broke into the Church of the Assumption of Mary, which is near the gathering place of the protesters against the Chilean government and social inequality. Benches, statues and sacred images were set on fire, making barricades against the police. The political and social crisis which broke out a few weeks ago in Chile, is an expression of the accumulation of hardship and unequal treatment of the population, and is now being accompanied by violent and uncontrolled demonstrations. Even the Cathedral of Valparaiso was targeted by a group of protesters who had tried to set fire to the large wooden doors and, after entering, destroyed the benches and several sacred images (see Fides, 21,26,28/10/2019).
The text, signed by the President of the Bishops' Conference, Mgr. Santiago Silva, by the Vice President, Mgr. René Rebolledo; by the Secretary General, Mgr. Fernando Ramos, and the Committee member, Mgr. Juan Ignacio González, stresses: "We are hurt by the mistreatment of people, constant looting and violence, wherever it comes from; it hurts when our churches and places of prayer are attacked without respect for God and for those who believe in Him. Churches and other places of worship are sacred".
Invoking, through prayer, God's forgiveness for these attacks, the Bishops add: "together with many Chileans we are radically opposed to injustice and violence, we condemn them in all their forms and we expect the courts to identify those responsible and punish them. The violent prevent us from looking with due attention to the claims of the majority of the Chilean people who want real and peaceful solutions".
In order to restore civil and peaceful coexistence, the Bishops ask the authorities "to apply the law and exercise it using all the resources of a democratic state. People are not only tired of injustice, but also of violence and the vast majority eagerly awaits dialogue to rebuild the social fabric". The statement closes invoking the Virgin of Carmen,"to give us a united Chile, forged by the efforts of all men and women of good will". (SL) (Full Text source: Agenzia Fides, 11/11/2019)