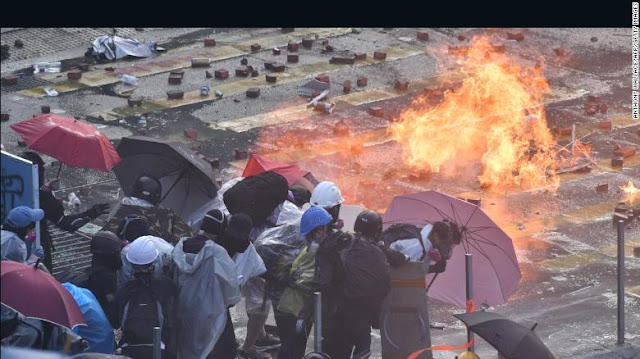 Police take PolyU. Student: We don't want another Tiananmen
by Paul Wang
Many students and activists arrested. Clashes took place all night and yesterday. At 2 am this morning, Msgr. Joseph Ha and some democratic parliamentarians tried to get the police and students to talk, but without success. The Hong Kong Supreme Court decrees that the anti-mask law is unconstitutional. The articles of the People's Daily.

Hong Kong (AsiaNews) - In the early hours of this morning, around 5.30 am, the Hong Kong police entered the PolyU (Polytechnic University) after a day of siege, arresting dozens of students, former students and activists of the anti-extradition movement .

A few hours earlier, a student had told the media: "We don't want to see another 8964 [June 4, 1989, the date of the Tiananmen massacre] here in Hong Kong or even at the PolyU, our second home."

Throughout the day yesterday the police had tried to enter the university occupied by about 500 people, who had also managed to block the traffic of the nearby Crossing Harbor Tunnel, the underwater tunnel that connects the Kowloon peninsula with the island of Hong Kong, one of the most important arteries in the area.

Law enforcement agencies used tear gas, water cannons, rubber bullets and in some parts deadly bullets. The occupants defended themselves with stones, Molotov cocktails, and in recent days even with arrows and catapults.

Around 2 am, Msgr. Joseph Ha, Auxiliary bishop of Hong Kong, together with some parliamentarians from the Democratic group and members of the PolyU tried to dialogue with the police commander to find a peaceful solution to the siege (photo n. 3). But the policemen, blinding them with the spotlights, warned them: "Go away. This is a warning. " The group led by Msgr. Ha tried to enter the university from other entrances, but was always thrown back by the police.

Even members of the social workers' union tried to talk to the police, but it was useless.

The police pointed out that it was not a "raid" on the university, but a "dispersal operation and arrests" against "a large band of rioters" who threw Molotov cocktails against the police and burned objects.

Meanwhile, in these very hours, the Supreme Court of Hong Kong has decreed that the emergency law that prohibits people from wearing masks in public "is unconstitutional": it gives a power to the chief executive that is not provided by the Basic Law, Hong Kong’s the mini-constitution.

The law was introduced last October 5 by the head of the executive Carrie Lam, exploiting a regulation of the colonial time that gave power to the governor in moments of "public danger". The aim was to stop participation in demonstrations, where the demonstrators, in fear of being recognized by the police, wore masks. With it the police had the power to arrest masked people and to fine them. The measure was useless: many demonstrators challenged the ban, marching in the streets and wearing masks of different shapes.

In China, nationalist and anti-Hong Kong propaganda continues. Yesterday the "People's Daily" reported an article stating that what is going on in the territory is now a battle for life or death ", between "subversion and anti-subversion" movements and that it is no longer permissible to stand by and watch as  "Hong Kong drowns".

Today, the same newspaper, the official organ of the Chinese Communist Party, says that there is no more room for the "compromise" in the fight against the protests, which it claims aim to destroy the "One nation, two systems" principle.
Full Text Source: AsiaNewsIT
Posted by Jesus Caritas Est at 9:46 AM