#BreakingNews over 11,000 at March for Life in the Netherlands with many Young Pro-Lifers saying “we love them both” - Watch Video 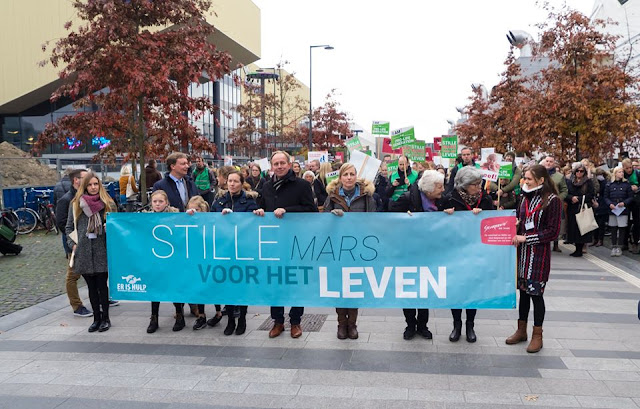 Right to Life UK reports that there were thousands at the annual March for life in the Netherlands following a poll showing youth are now the most pro-life generation.
Posted on November 18, 2019

Over 11,000 people joined the Netherlands ‘March For Life’ 2019 to proclaim the right to life of unborn babies and highlight the suffering that abortion brings.

Campaigners marched in silence through the city of Utrecht carrying signs that said: “we stand up for the rights of the unborn child,” “we love them both” and “I am the pro-life generation”.

The organisers of the event, noted that a “striking” number of young people were in attendance.

The Leader of the Reformed Political Party, Kees Van der Staaij, also noted the young crowd, saying: “more and more younger people say that it has gone too far how that is arranged in the Netherlands”. He added: “There is change in the air”.

Gert Jan Maarten Segers, a member of the Christian Union Party, said: “It is 2019, not 1970. Young people think more critically about abortion and are open to arguments. How encouraging is that!”

Researchers at Tilburg University found that Dutch people in their 20s and 30s are more likely to be pro-life than those who are older than them.

The study, due to be published in the journal Mens en Maatschappij, is based on data from a European study that has been ongoing for almost 40 years. Over 7,000 Dutch people are part of the research project, answering questions on issues such as abortion and euthanasia.

The difference between younger and older generations is only getting bigger, the Tilburg researchers say.

This is an emerging trend across Europe and around the world.

UK polling, conducted in London earlier this year, shows that 18-34-year-olds were also more likely to be pro-life than those older than them.

The Director of Netherlands’ March for Life, Kees van Helden believes it is important to have the freedom to offer support to women outside abortion clinics. He told the young March for Life audience: “At the clinics we still find women who cancel their abortions at the entrance to the clinic every week. As long as we stand there and people abort the abortion, that means that there is something structurally wrong… So something really needs to change.”

He revealed the pro-life organisation are busier than ever assisting women with unplanned pregnancies. In 2014, they had 100 requests for help, but last year received over 520 requests.

Over 30,000 abortions take place in the Netherlands each year.
Full Text Source: https://righttolife.org.uk/
Image Source: https://www.facebook.com/SchreeuwomLeven/
Posted by Jesus Caritas Est at 11:09 AM