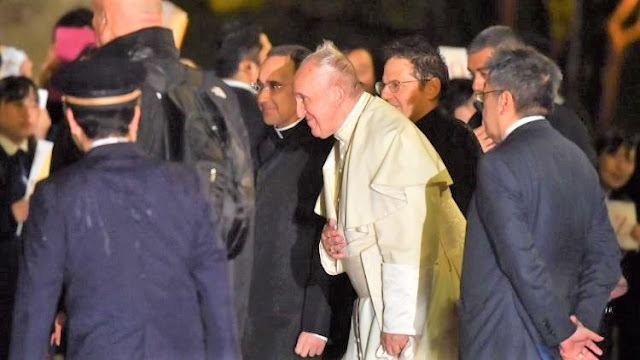 Upon arrival at Tokyo-Haneda Airport, the Holy Father Francis was welcomed at the foot of the plane by the Deputy Prime Minister of Japan, S.E. Mr. Tarō Asō. Two children in traditional dress offered him a floral tribute, in the presence of about 100 students from Catholic schools. Then, after the greetings of the respective Delegations and after crossing the Honor Guard, the Pope and the Deputy Prime Minister had a brief private meeting in the VIP 3 hall of the Airport.

At the end the Holy Father moved by car to the Apostolic Nunciature of Tokyo where, upon his arrival, he was welcomed in the courtyard by a group of 200 faithful and at the entrance of the house by the staff of the Nunciature.
VaticanNews.va Reports that Pope Francis as a young priest desired to become a missionary to Japan but this was rejected had to do with his health. He caught a severe case of pneumonia at the age of 21, and had to have surgery to remove a portion of his right lung.
The news agency further reported that on the same week as his arrival, Japan’s government made a historic decision related to the Japanese-language characters they use to write the word “Pope”. For a long time the official characters – transliterated as Hōō – meant “Emperor of the Law”. A similar term is used to designate the highest-ranking official in Buddhism. But the Catholic Church in Japan uses a different term. Theirs – Kyō-kō – is more like “Emperor of Teaching”. Japanese Catholics have been asking the government to recognize that term for over 40 years. The move could be called a sign of goodwill to prepare the Pope’s path in the East Asian nation.
Posted by Jesus Caritas Est at 11:05 AM