Pope Francis meets with Grand Imam Ahmed Al-Tayeb, Sheik of Al-Azhar at Vatican and they Discuss House of Abraham - Video 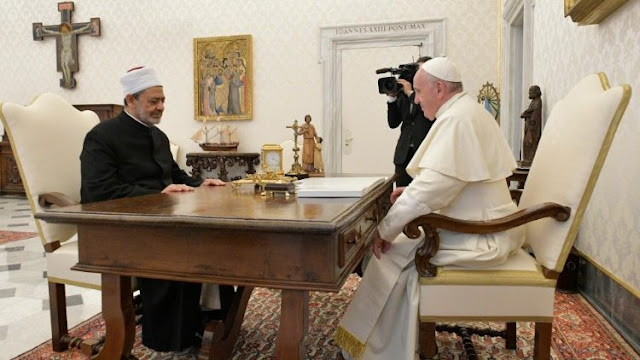 This morning, 15th November 2019, Pope Francis received in Audience the Grand Imam Ahmed Al-Tayeb, Sheik of Al-Azhar, accompanied by the Deputy Prime Minister of the United Arab Emirates, H.E. Saif bin Zayed Al Nahyan, and by the Ambassador of the Republic of Egypt to the Holy See, H.E. Mahmoud Samy. Also present were some figures and representatives of Al-Azhar University and of the Higher Committee for achieving the goals contained in the Document on Human Fraternity for World Peace and Living Together, created in August this year. His Eminence Cardinal Miguel Ángel Ayuso Guixot, President of the Pontifical Council for Interreligious Dialogue, and Mons. Yoannis Lahzi Gaid, Secretary of the Holy Father, attended on behalf of the Holy See.

During the cordial discussions, the issue of the protection of minors in the digital world was mentioned, as well as the recent journey of His Holiness to the United Arab Emirates, and the initiatives put into place by the Higher Committee for achieving the goals of the Document on Human Fraternity during these months since its foundation.

Finally, the members of the Committee introduced its most recent member to the Holy Father, Ms Irina Georgieva Bokova, and they presented to the Pope the project for the “House of Abraham”, inaugurated in New York in September.
(According to RomeReports this project would build a large complex for the three Abrahamic religions in Abu Dhabi. It includes two museums and three buildings: a mosque, a synagogue, and a church dedicated to St. Francis of Assisi.)
Image Shared from Vatican Media - Text Source:
http://press.vatican.va/content/salastampa/it/bollettino/pubblico/2019/11/15/0878/01832.html
Posted by Jesus Caritas Est at 9:20 AM