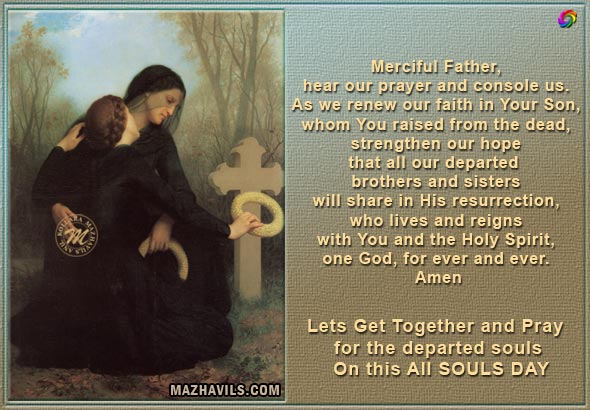 Commemoration of All Faithful Departed

The commemoration of all the faithful departed is celebrated by the Church on 2 November, or, if this be a Sunday or a solemnity, on 3 November. The Office of the Dead must be recited by the clergy and all the Masses are to be of Requiem, except one of the current feast, where this is of obligation.

The theological basis for the feast is the doctrine that the souls which, on departing from the body, are not perfectly cleansed from venial sins, or have not fully atoned for past transgressions, are debarred from the Beatific Vision, and that the faithful on earth can help them by prayers, almsdeeds and especially by the sacrifice of the Mass. (See PURGATORY:(Lat., "purgare", to make clean, to purify) in accordance with Catholic teaching is a place or condition of temporal punishment for those who, departing this life in God's grace, are, not entirely free from venial faults, or have not fully paid the satisfaction due to their transgressions.) )
In the early days of Christianity the names of the departed brethren were entered in the diptychs. Later, in the sixth century, it was customary in Benedictine monasteries to hold a commemoration of the deceased members at Whitsuntide. In Spain there was such a day on Saturday before Sexagesima or before Pentecost, at the time of St. Isidore (d. 636). In Germany there existed (according to the testimony of Widukind, Abbot of Corvey, c. 980) a time-honoured ceremony of praying to the dead on 1 October. This was accepted and sanctified by the Church. St. Odilo of Cluny (d. 1048) ordered the commemoration of all the faithful departed to be held annually in the monasteries of his congregation. Thence it spread among the other congregations of the Benedictines and among the Carthusians.
Of the dioceses, Liège was the first to adopt it under Bishop Notger (d. 1008). It is then found in the martyrology of St. Protadius of Besançon (1053-66). Bishop Otricus (1120-25) introduced it into Milan for the 15 October. In Spain, Portugal, and Latin America, priests on this day say three Masses. A similar concession for the entire world was asked of Pope Leo XIII. He would not grant the favour but ordered a special Requiem on Sunday, 30 September, 1888.Catholic Encyclopedia In the Greek Rite this commemoration is held on the eve of Sexagesima Sunday, or on the eve of Pentecost. The Armenians celebrate the passover of the dead on the day after Easter.
Text from The Catholic Encyclopedia
Posted by Jesus Caritas Est at 8:09 PM