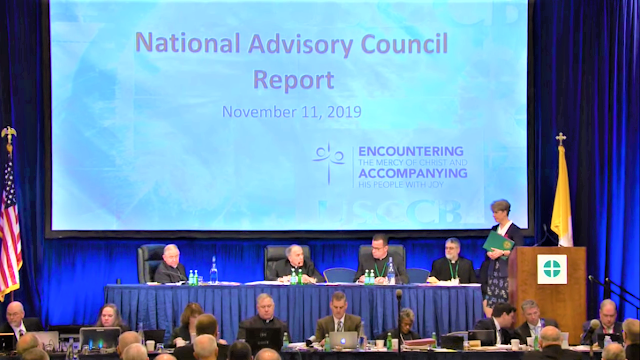 October 22, 2019
WASHINGTON—The United States Conference of Catholic Bishops (USCCB) will gather for the 2019 Fall General Assembly in Baltimore, November 11-13. During the assembly, the bishops will elect a new president, vice president, and six committee chairs. They will also discuss and vote on seven action items.
The assembly will begin with an address by the Papal Nuncio to the United States, Archbishop Christophe Pierre. The bishops will also hear from Cardinal Daniel N. DiNardo, Archbishop of Galveston-Houston as he gives his final address as USCCB president upon completion of his three-year term.

During the assembly, the U.S. bishops will hear a report from the National Advisory Council, a group created by the USCCB comprised of religious and lay people primarily for consultation on Action Items and Information Reports before the Administrative Committee.
The bishops will vote on the Program of Priestly Formation (6th edition) for use in the dioceses of the United States. They will also vote to approve a short letter and five short video scripts to supplement Forming Consciences for Faithful Citizenship, their teaching document for the faithful on the political responsibility of Catholics.
The Latin Church members of the USCCB will vote to approve two translations by the International Commission on English in the Liturgy (ICEL): (1) a translation of the Order of Christian Initiation of Adults as the base text for a future edition of this rite in the dioceses of the United States, and (2) a translation of the Hymns of the Liturgy of the Hours for use in the dioceses of the United States.
The Subcommittee on Hispanic Affairs of the Committee on Cultural Diversity in the Church will request the authorization of the full body of bishops to lead the process of developing a new formal statement and comprehensive vision for Hispanic/Latino ministry in response to the V Encuentro process, to be developed and approved by the bishops during the next USCCB strategic planning cycle, 2021-2024.
The bishops will also vote on the Revised Strategic Priorities for the 2021-2024 Strategic Plan for the USCCB, as well as the proposed budgets for 2020. The full body of bishops will vote to elect the new Board of Directors of Catholic Relief Services. The members are also expected to hear an update on progress toward establishing a nationwide, third-party reporting system for abuse or misconduct by bishops. This new national reporting system would not replace systems already in place in every diocese for the reporting of abuse by priests.
In addition to the election of a new president and vice president for the USCCB, the bishops will vote for new chairmen of six committees: Canonical Affairs and Church Governance; Ecumenical and Interreligious Affairs; Evangelization and Catechesis; International Justice and Peace; Protection of Children and Young People; and Religious Liberty.
The bishop elected for chairman of the Committee for Religious Liberty fills the vacancy created earlier this year after the chairman stepped down for health reasons. At the conclusion of this year’s assembly, the bishop elected to the Committee for Religious Liberty will assume the role of chairman, and the bishops elected for the remaining five committees will serve for one year as chairmen-elect before beginning a three-year term at the conclusion of the 2020 Fall General Assembly.
Public sessions of general assembly discussions and votes will be available via livestream at: http://www.usccb.org/live.
News updates, vote totals, texts of addresses and presentations and other materials will be posted to this page: www.usccb.org/meetings as soon as possible.
Those wishing to follow the meeting on social media can use the hashtag #USCCB19 and follow on Twitter (@USCCB) as well as on Facebook (www.facebook.com/usccb) and Instagram (https://instagram.com/usccb).
Live stream and satellite feed will run Monday, November 11, Tuesday, November 12, and Wednesday, November 13, while the assembly is in session. Broadcast media outlets interested in taking the meeting's satellite feed should contact the public affairs office to request coordinates; the livestream will be available at: http://www.usccb.org/about/leadership/usccb-general-assembly/usccb-general-assembly-live-stream.cfm.
FULL TEXT Release: USCCB