What is Veterans' or Remembrance Day - 5 things to SHARE - Wear a #Poppy and Prayers to Say! 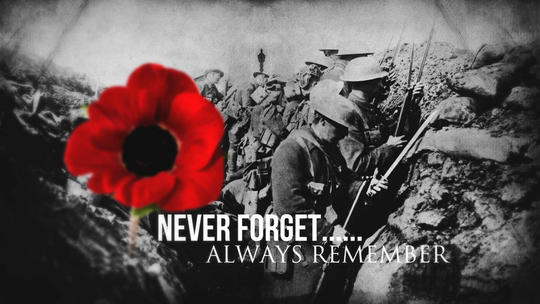 1. On November 11, many people wear a red poppy in memory of the war veterans and victims. It was at 11 o'clock on the 11th day of the 11th month in 1918 that the Armistice was signed signaling the end of World War I.
2. At that point the guns stopped after 4 years of war.

3.Remembrance Day was instituted by King George the V in 1919 and is celebrated in Commonwealth countries. In the USA it is celebrated as Veteran's Day.
4.The red from the Poppy flower, which grew over several battlefields, sybolized the blood shed by the troops.
5. The Poppy comes from the famous poem of remembrance: (IMAGE SOURCE : THE GUARDIAN/GOOGLE)
In Flanders fields the poppies blow
Between the crosses, row on row,
That mark our place; and in the sky
The larks, still bravely singing, fly
Scarce heard amid the guns below.

We are the Dead. Short days ago
We lived, felt dawn, saw sunset glow,
Loved, and were loved, and now we lie
In Flanders fields.
Take up our quarrel with the foe:
To you from failing hands we throw
The torch; be yours to hold it high.
If ye break faith with us who die
We shall not sleep, though poppies grow
In Flanders fields.
- John McCrae
Let us pray for these victims and all victims of war. May we learn to live in peace with one another and with God.
FROM USCCB OFFICIAL PRAYERS FOR WAR


Prayers in a Time of War

Posted by Jesus Caritas Est at 8:37 AM