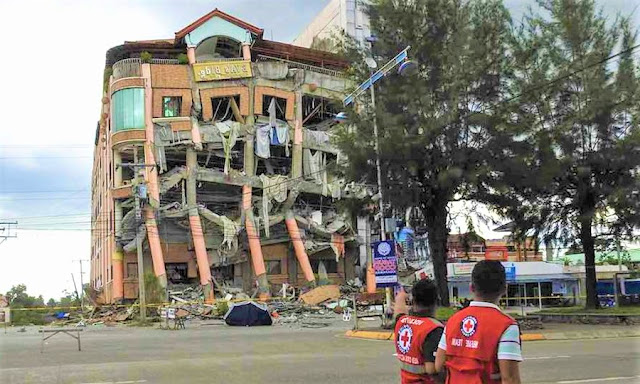 ASIA/PHILIPPINES - Prayer and solidarity for the earthquake victims in Mindanao
Manila (Agenzia Fides) - A special prayer of the Rosary and a campaign of solidarity for the victims of the 6.9 magnitude earthquake that affected the island of Mindanao in the southern Philippines on Sunday, December 15: this is the response of the Catholic community of the archipelago that has mobilized to help the victims of the earthquake, which has caused at least four deaths and many injured, including a priest from the Diocese of Digos, who was visiting the community of a remote village in the region of Davao del Sur. According to the Philippine Institute of Volcanology and Seismology, the epicenter of the earthquake was about nine kilometers west of the city of Digos. The earthquake damaged houses and properties and triggered landslides, putting many villages at risk.
"Let us remember our brothers and sisters in Mindanao who again experienced an earthquake stronger than the previous. The nation will show that, despite the earthquake, we have faith and we believe that somebody will come and save us", said Cardinal Luis Antonio Tagle this morning, December 16, during the "Simbang Gabi", the "dawn Mass" at the Cathedral of Manila, packed with thousands of Filipino faithful who participate in the Novena in preparation for Christmas. "Let us be united with them who at this moment are probably having their ‘Simbang Gabi’ not in a beautiful church like this cathedral, yet continue to profess their faith", he said.
Bishop Guillermo Afable, at the head of the diocese of Digos, the most affected, asked the Filipinos to pray the Rosary for the victims of the earthquake: "I call on Filipinos let us all pray the Holy Rosary especially today because this is the best thing to do in times of danger", he told church-run "Radio Veritas".
The region was hit by earthquakes even in the months of October and November.
The Philippines lie on the so-called "Ring of Fire" of the Pacific, geologically very active, and this is why it experiences frequent earthquakes. (PA) (Agenzia Fides, 16/12/2019)
Posted by Jesus Caritas Est at 9:56 AM

The risk assessment exercises by the major insurance companies and financial institutions is another factor encouraging people to reduce risks by going in for the state-of-the-art earthquake protection technologies https://utahearthquakestoday.blogspot.com