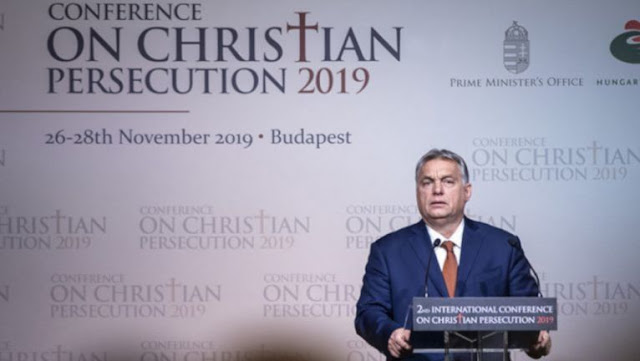 Budapest hosted a gathering of over 600 people with Christian clerics as well as politicians for a “world congress,” the second one the Orbán government organized. The Hungarian government claims that today 250 million Christians are victims of persecution and oppression worldwide, including in Europe. Here are a few comments from the speeches of Hungarian politicians and experts on the state of Christianity in the world.
According to Foreign Minister Péter Szijjártó, “one needs courage to openly talk about the fate of Christians,” and those who accepted the invitation to the congress showed “extraordinary courage.” Szijjártó recalled that in the past year 2,625 Christians were arrested without any legal grounds. Attacks on Christian churches numbered more than 1,200.
From Szijjártó’s speech it became clear that the Orbán regime defines “Christian phobia” and “hatred of Christians” in the broadest possible sense.  Hungarian politicians consider intolerance of the Christian set of religious beliefs to be “persecution.” Most of the speeches of Hungarian politicians indicated that the Hungarian government’s latest foray into the defense of Christianity includes a large dose of criticism of Western Europeans who refuse to join Hungary in its effort to eradicate Christian persecution at home and abroad.

How can this task be achieved?
Gergely Gulyás had formulated an answer saying: “Understanding the impact of the persecution of Christians on society as a whole, in space and in time, required the work of knowledgeable, highly qualified scientists and practitioners, exploring geopolitical and religious diplomacy, and finding appropriate solutions.”
Naturally, Zsolt Semjén, deputy prime minister and the chief spokesman of the interests of the Hungarian Catholic Church, was present. The persecution of Christians “begins when in the West a teacher is being vilified because she wears a small cross.” There is only “one Christian persecution, which has more sophisticated and more brutal forms.” The vilification of the teacher is thus just as much persecution as is the murder of a Christian because of his faith. Semjén pointed out that in Hungary “it is the duty of all state organs to defend Christian culture, which by now is stated in the new constitution.” Semjén also noted that in the last ten years the Hungarian state built or renovated 3,000 churches, and he promised that “not one church will become a shopping center or a mosque” as far as Hungary is concerned.
In the keynote speech by Viktor Orbán, he claimed that “our language is unique; our songs, our literature, and our dances are peculiar to us.”
Edited from https://hungarianspectrum.org/