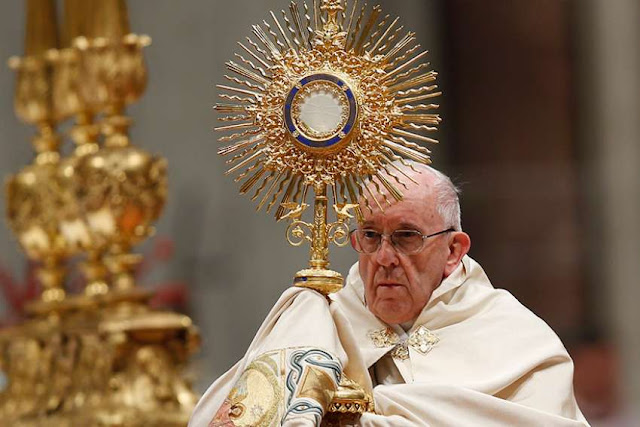 The Son sent by the Father placed his tent in Bethlehem of Efrata, "so small to be among the villages of Judah" (Mi 5,1); he lived in Nazareth, a town never mentioned in Scripture except to say: "can anything good come out of Nazareth?" (Jn 1:46), and died discarded by the great city, by Jerusalem, crucified outside its walls. God's decision is clear: to reveal his love he chooses the small city and the despised city, and when he reaches Jerusalem he joins the people of sinners and the discarded. None of the inhabitants of the city realize that the Son of God made man is walking on his streets, probably not even his disciples, who will fully understand only with the resurrection the Mystery present in Jesus.

The words and signs of salvation that He performs in the city arouse amazement and a momentary enthusiasm, but they are not accepted in their full meaning: shortly they will no longer be remembered, when the Roman governor will ask: "Do you want Jesus or Barabbas free?" . Outside the city, Jesus will be crucified, high on Golgotha, to be condemned by the gaze of all the inhabitants and derided by their sarcastic comments. But from there, from the cross the new tree of life, the power of God will draw everyone to himself. And also the Mother of God, who is the Sorrowful under the cross, is about to extend her motherhood to all men. The Mother of God is the Mother of the Church and her maternal tenderness reaches all men.

In the city God has set up his tent ..., and from there he never left! Its presence in the city, even in our city of Rome, "must not be manufactured, but discovered, revealed" (Apostolic Exhortation Evangelii gaudium, 71). It is we who must ask God for the grace of new eyes, capable of "a contemplative gaze, that is, a gaze of faith that discovers God who lives in his houses, in his streets, in his squares" (ibid., 71). The prophets, in Scripture, warn against the temptation to link the presence of God only to the temple (Jer 7,4): He lives among his people, walks with it and lives his life. His loyalty is concrete, it is proximity to the daily existence of his children. Indeed, when God wants to make all things new through his Son, it does not start from the temple, but from the womb of a small and poor woman of his People. This choice of God is extraordinary! History does not change through the powerful men of civil and religious institutions, but starting from the women of the periphery of the empire, like Mary, and from their sterile womb, like that of Elizabeth.

In Psalm 147, which we prayed a little while ago, the psalmist invites Jerusalem to glorify God, because He "sends his Word to earth, his message runs fast" (v. 4). By means of his Spirit, who pronounces his Word in every human heart, God blesses his children and encourages them to work for peace in the city. Tonight I would like our gaze on the city of Rome to take things from the point of view of the gaze of God. The Lord rejoices in seeing how many realities of good are made every day, how many efforts and how much dedication in promoting fraternity and solidarity. Rome is not just a complicated city, with many problems, with inequalities, corruption and social tensions. Rome is a city where God sends his Word, which nestles through the Spirit in the hearts of its inhabitants and pushes them to believe, to hope despite everything, to love by fighting for the good of all.

I think of many courageous people, believers and non-believers, whom I have met in recent years and who represent the "beating heart" of Rome. Truly God has never stopped changing the history and face of our city through the people of the little and poor who live there: He chooses them, inspires them, motivates them to action, makes them supportive, pushes them to activate networks , to create virtuous bonds, to build bridges and not walls. It is precisely through these thousand streams of the living water of the Spirit that the Word of God fecundates the city and makes it sterile as a "joyful mother of children" (Ps 113: 9).
And what does the Lord ask of the Church of Rome? He entrusts us with his Word and urges us to throw ourselves into the fray, to involve us in the meeting and in the relationship with the inhabitants of the city so that "his message will run fast". We are called to meet others and listen to their existence, their cry for help. Listening is already an act of love! Having time for others, dialoguing, recognizing with a contemplative gaze the presence and action of God in their lives, witnessing the new life of the Gospel with deeds rather than words, is truly a service of love that changes the reality. In doing so, in fact, new air is circulating in the city and also in the Church, the desire to get back on the road, to overcome the old logic of opposition and the fences, to collaborate together, building a more just and fraternal city.


We must not be afraid or feel inadequate for such an important mission. Let us remember: God does not choose us because of our "skill", but precisely because we are and we feel small. We thank him for his grace that has sustained us in this year and with joy we raise the song of praise to him.
Source: Vatican.va - Click Play on the Video below:
Posted by Jesus Caritas Est at 11:05 AM