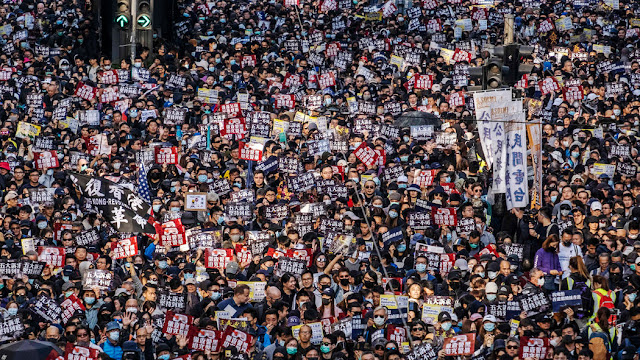 March of 800 thousand marks six months of anti-extradition movement
Asia News reports that in six months, over 6 thousand detained and 30 thousand non-lethal shots on the crowd In the beginning, the demonstrations in the former British colony were against the extradition bill (now withdrawn); now they call for democracy and an independent investigation into police abuses. 4,474 men and 1,548 women were arrested, aged between 11 and 84 years. The Office for Internal Complaints Against the Police has received over 1,300 complaints.
AsiaNews:
by Paul Wang
The march was the first after weeks of bans by the police. There were some incidents, but overall it was peaceful. Card Zen and some priests and Catholics among the participants. Nearly 6 thousand arrests; among them many under-18s.

Hong Kong (AsiaNews) - Hundreds of thousands of people took part in the march against the government from Victoria Park to Chater Road in Central yesterday.

The huge gathering wanted to celebrate the six months since the first demonstrations against the extradition law.

On 9 June there was a demonstration that brought together over one million people. The march was the first permit after weeks of a series of bans by the police.

It took place in a peaceful manner even if in the evening there were some skirmishes between radicals and police, with the launch of some Molotov cocktails against the headquarters of the Supreme Court and vandalism against some pro-China stores.

The march was organized by the Civic Front for Human Rights, which estimates participation at 800 thousand. According to the police, there were only 183 thousand participants.

Jimmy Sham, one of the Front’s leaders, noted that although the participants were less than in the past, they are proof that the population of Hong Kong has not fallen asleep. Along the route there were the slogans that became typical in these demonstrations: "Five demands, not one less" and "Dissolve the police force now!".

The five demands include the request for an independent inquiry into excessive police violence and universal suffrage.

But the government appears immovable. This is partly because it is supported by Beijing and despite the Democrats’ victory in the district elections or the United States Hong Kong human rights bill, which threatens the territory’s special trade status if the principle "One Country, two systems", is not respected.

In recent months, the government has had at least 6,000 people arrested and charged with revolt, vandalism and resistance to the police. Many of them are under the age of 18.
Source: AsiaNewsIT
Posted by Jesus Caritas Est at 1:46 PM