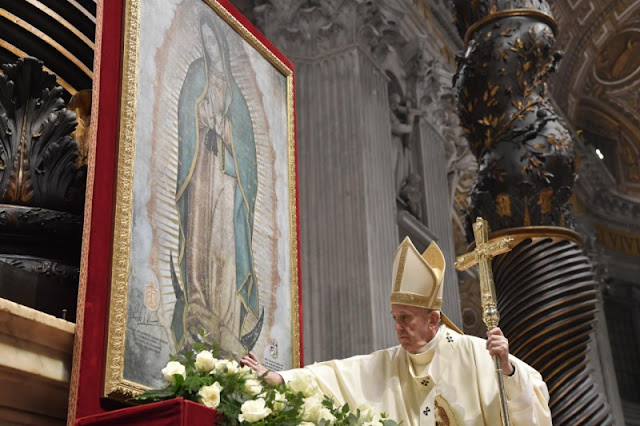 OUR LADY OF GUADALUPE
HOLY MASS FOR LATIN AMERICA

HOMILY OF HIS HOLINESS POPE FRANCIS

Today's celebration, the biblical texts we have heard, and the image of Our Lady of Guadalupe that reminds us of the Nican mopohua, suggest three adjectives for her: lady-woman, mother and mestizo.

Christian piety throughout the ages always sought to praise it with new titles: they were filial titles, titles of the love of the people of God, but they did not touch that woman-disciple being at all.

St. Bernard told us that when we talk about Mary, praise, praise titles are never enough, but they did not touch that humble discipleship of her at all. Disciple.

Faithful to his Master, who is his Son, the only Redeemer, he never wanted to take anything from his Son. He never introduced himself as co-redeemer. No, disciple.

And some Holy Father says that discipleship is more worthy than motherhood. Matters of theologians, but disciple. He never stole anything from his Son, he served it because he is a mother, he gives his life in the fullness of time, as we hear that Son born of a woman.

When we seek the role of women in the Church, we can go by way of functionality, because women have functions to fulfill in the Church. But that leaves us halfway.

The woman in the Church goes further, with that Marian principle, that "maternalizes" the Church, and transforms her into the Holy Mother Church.

Mary woman, Mary mother, without another essential title. The other titles — think of the Litanian latanies — are titles of children in love who sing to the Mother, but do not touch the essentiality of Mary's being: woman and mother.

And third adjective that I would say looking at her, she wanted us mixed race, she mixed up. But not only with Juan Dieguito, with the people. He was mixed to be the Mother of all, he was mixed with humanity. Why? Because she mixed God. And that is the great mystery: Mary Mother mestizo, God, true God and true man, in her Son.

When we come with stories that we had to declare this, or do this other dogma or this, do not get lost in nonsense: Mary is a woman, she is Our Lady, Mary is the Mother of her Son and the Holy Mother hierarchical Church and Mary is mestizo, woman of our peoples, but who mestizo, God.

Let him speak to us as he spoke to Juan Diego from these three titles: with tenderness, with feminine warmth and with the proximity of miscegenation. So be it.
FULL TEXT + Image Source: Vatican.va