Pope Francis Issues Motu Proprio regarding the Dean of the College of Cardinals "Over the centuries the Roman Pontiffs have adapted to the needs..." Full Text 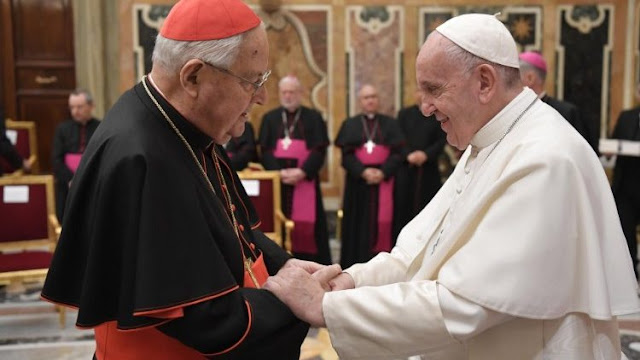 The Pope on Saturday, December 21, 2019, accepted the resignation of Cardinal Angelo Sodano as Dean of the College of Cardinals, who has stepped down because of his advanced age. At the same time, with a special Motu proprio (see below), he established that from now on the post will be for five years, that it can be renewed if necessary, and that at the end of the mandate the outgoing cardinal will receive the title of "Dean Emeritus".
Full Text - APOSTOLIC LETTER

Apostolic Letter in the form of a “Motu Proprio” regarding the Office of Dean of the College of Cardinals, 21.12.2019

Throughout the centuries the Roman Pontiffs have adapted to the needs of their times the composition of the College of Cardinal Fathers, specially called to undertake the election of the Supreme Pastor of the Church and to assist him in treating issues of the greatest relevance in the daily care of the universal Church.
The Holy Father Paul VI, of eternal memory, with the Motu Proprio of 11 February 1965, expanded the composition of the aforementioned College of Cardinal Fathers, calling to be part of the Order of Bishops, in addition to the Titulars of the suburbicarian Sees of Rome, also those Oriental Patriarchs who had been elevated to the dignity of cardinal (cf. Ad Purpuratorum Patrum Collegium, AAS, 57 [1965], 295-296).
With the Rescript ex Audientia of 26 June 2018, I too took steps to broaden the composition of the members of the aforementioned Order of Bishops, including within it a number of Cardinals who are heads of Roman Dicasteries and equating them in every respect with Cardinals who are assigned a suburbicarian Church and with the Oriental Patriarchs ascribed to the same Order.
In this regard, the regulations of the Church, with clear and precise prescriptions, have for some time now also wisely provided for the singular place, within the College of Cardinals, that belongs to the Cardinal Dean, and in his place, to the Sub-Dean, called to exercise among the brother Cardinals a fraternal and fruitful presidency of primacy inter pares (cf. can. 352 § 1). These norms also prescribe the manner of their election by the Brothers who are members of the Episcopal Order (cf. can. 350 § 1 and 352 § 2-3).
Now, however, having accepted the resignation from the office of Dean of the College of Cardinals presented by His Eminence Cardinal Angelo Sodano, whom I thank most sincerely for the high service he has rendered to the College of Cardinals during the almost fifteen years of his mandate, and also having regard to the fact that with the increase in the number of Cardinals, ever greater commitments are being placed on the person of the Cardinal Dean, it seemed opportune to me that from now on the Cardinal Dean, who will continue to be elected from among the members of the Order of Bishops in the manner established by can. 352 § 2 of the Code of Canon Law, remain in office for a five-year period, renewable if necessary, and at the end of his service, he may assume the title of Dean Emeritus of the College of Cardinals.
To all the members of the College of Cardinals of the Holy Roman Church I wish, finally, to express my deep gratitude for their generous service to the Church and to my ministry as Successor of Peter, with my Apostolic Blessing.
Given in Rome, at Saint Peter’s, on 29 November of the Year of the Lord 2019, the seventh of our Pontificate.
FRANCIS
Full Text Official Translation from http://press.vatican.va/content/salastampa/en/bollettino/pubblico/2019/12/21/191221b.html- Image Source: VaticanNews.va -
Posted by Jesus Caritas Est at 1:02 PM