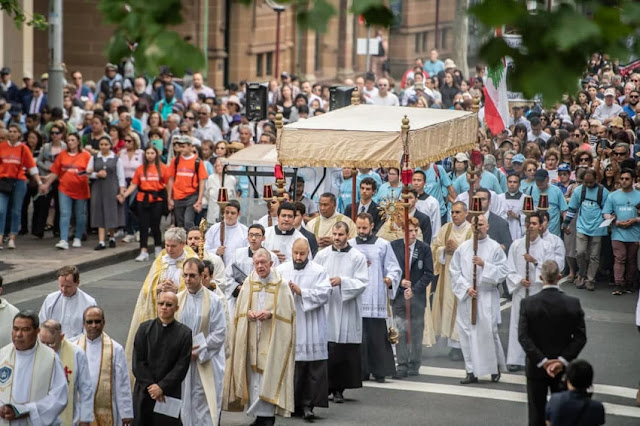 Many of the city’s streets came to standstill as the large procession led by the Archbishop of Sydney, the Most Rev Anthony Fisher OP, made its away along the 1.5km route from St Patrick’s Church Hill to St Mary’s Cathedral for benediction with hymns, incense and prayers to bless all inhabitants of the city.


Eucharistic processions are an ancient and revered sacramental devotion within the Catholic faith.

The practice of devotion in the Sydney Archdiocese was resurrected in the early 2000s and has been a positive and popular source of unity for the Sydney Catholic community ever since.

Usually held to coincide with the Feast of Corpus Christi, this year’s procession was delayed until today, due to the Australian bishops being in Rome in June for the ad limina.


As the huge crowd made its way along Pitt Street up to Hunter Street they loudly prayed the rosary and sang hymns as passersby stopped to watch.

One participant, Bernice Wong with her children from St Francis Assisi School Paddington, said it was a fabulous occasion and great to witness for Catholics coming together in such huge numbers and proclaiming the faith as one.

“I think it’s a great experience for our children to witness the faith here,” said Ms Wong.


Friends Angela Finnigan and Jill Dillon, from the Lay Carmelite community in Ashfield described it as a wonderful positive demonstration of our faith.

“I think the Blessed Sacrament walking through this city is a blessing for this country and city,” said Ms Finnigan. “It is not a negative story but a positive demonstration of our faith.”

“We want to show the city that so many people still love Christ and the Church,” said Ms Dillon.

Archbishop Fisher re-iterated the power of the Eucharist as the fulcrum of the Christian faith in his homily to the faithful in the Cathedral forecourt.


“The Blessed Sacrament is no mere theory, word, symbol, or custom – important as those things are – no it is a person: Jesus Christ, our Universal King; really, substantially present to us, body and soul flesh and blood humanity and divinity,” he said.

“[Christ in the Eucharist] is the centre from whom the whole of our faith and life flows with ever increasing centrifugal force. This is why we gather every year with Christ and take him out into the streets of Sydney and bless the city with his presence.

“We turn to Him in this time in the history of our church in Australia – where Christianity is threatened in many ways.

“It is this sacrament that marks Christianity out from all other faiths, philosophies and ideologies – that God is really with us; as one of us and for us; a whole and entire well spring of love for which out identity and mission and endeavours flow.”

David James Marthana of St Joseph’s Riverwood, a devoted attendee since the Walk with Christ inception, spoke on the message of Christ in the Eucharist being a message of peace.


“The Eucharistic procession here today is a message of peace – peace to the world. The message of Jesus is of peace,” Mr Marthana said.


“In society now it is frowned upon for to express your faith- especially for young people like myself- so its motivating to share the faith here with friends,” said Miss Jee.

It is certain that many blessings for Sydney will ensue.
Edited from the Catholic Weekly of Australia