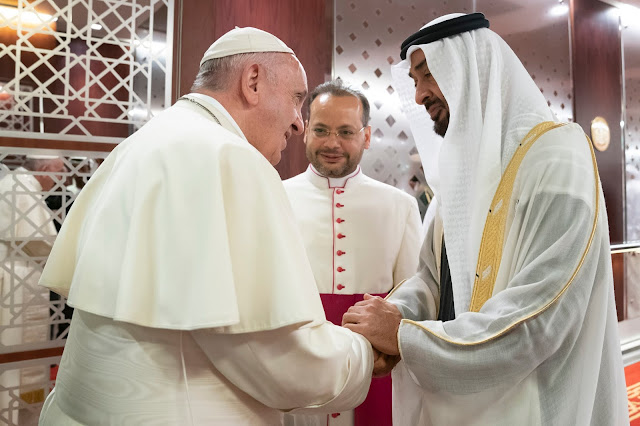 Pope Francis arrives in UAE on 27th Apostolic Journey abroad - This is the first time a Pope has visited an Arabic peninsula.  Pope Francis will preside at a Mass with over 130,000 people present.
Here is the full report by Vatican News va:

The papal plane touched down in Abu Dhabi on Sunday evening, and an official delegation welcomed Pope Francis at the Presidential Airport.
By Devin Watkins & Linda Bordoni

Crown Prince Sheikh Mohammed bin Zayed Al-Nahyan greeted the Pope as he stepped off the plane and onto Emirati soil.

As they entered the airport, children in traditional garb presented the Holy Father with a bouquet of flowers and welcomed him to the UAE in his native Spanish.

Pope Francis then greeted his old friend and ally in his quest to strengthen dialogue between East and West, the Grand Imam of al-Azhar, Ahmed el-Tayeb.

The Holy Father's arrival marks the very first time a Pope has set foot on the Arabian Peninsula.

The theme of the historic visit is “Make me a channel of your peace”, and it carries with it an urgent appeal to the region and to the world to pursue values of peaceful coexistence and overcome prejudice and allegiance to divisive ideologies, sects, and political parties.

Like the dove carrying an olive branch on the journey's official logo, Pope Francis sets foot in the Gulf region as a herald of peace with a message of hope for the future of mankind.
FULL TEXT SOURCE: Vatican News va
Posted by Jesus Caritas Est at 6:02 PM No comments:

Wow Star Super Bowl Football Players - Pray and Speak of their Love for God's Word in the Bible!

Millions of Americans are watching Super Bowl LIII as the New England Patriots take on the Los Angeles Rams at the Mercedes-Benz Stadium in Atlanta, Georgia. Both the Rams and Patriots have practicing Christians on their teams. These faithful men openly pray before games and are not afraid to share their faith. Some of the players in the game talk about their love for the Bible in the Video below.  Video source: Youversion Bible App.

"This is not life and death. This is not the biggest thing that we'll do," he says. "The biggest and most important decision we'll ever make in our lives is what we do with the knowledge of Jesus Christ. And if you don't know the answer to that question it can be challenging at times. But I think for people that look at this game as the end all, be all, it's not! It's a game. We're thankful to be here, we're thankful for the opportunity. We love what we do but we have to keep perspective on the greater good!"
Posted by Jesus Caritas Est at 5:40 PM No comments: 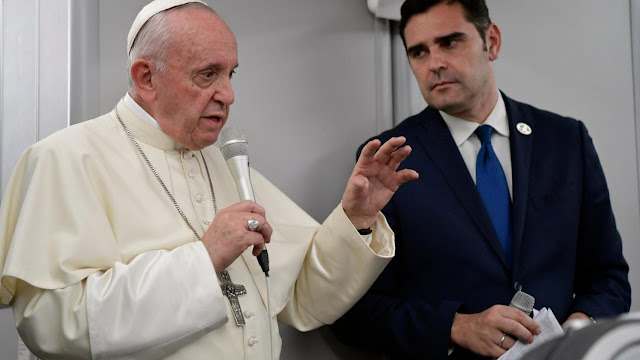 On route to Abu Dhabi on Sunday, Pope Francis greeted journalists and gave them an icon.

The interim Director of the Holy See Press Office, Alessandro Gisotti,  said: “Holy Father, it seems like yesterday - it almost was yesterday - that we were on the flight back from Panama. Among the many welcome posters there was one from the Muslim community of Panama that read: ‘Welcome Pope Francis, man of peace’, in Spanish. It is with this spirit that I believe they await you in the Emirates, as a man of peace, to strengthen dialogue”.

The Pope said: “This morning I received news that it was raining in Abu Dhabi, and there it is thought of as a sign of blessing. Let’s hope that everything goes like that”.

Pope Francis : “I brought each of you an icon made in the monastery of Bose, a copy, so that you can take it home. It’s on the theme of dialogue between the old and the young. I care deeply about this topic, and I think it’s a challenge”.

The icon, distributed to journalists by the Prefect of the Dicastery for Communication, Paolo Ruffini, shows a young monk carrying an elderly monk on his shoulders.

The Vatican press reported that;
Upon his arrival at Fiumicino, airport, the Holy Father visited the structure used for the assistance of homeless people promoted by the Airports of Rome. The structure is part of the project "Lives in transit, the human face of an airport" and provides support to the clochards who station and repair at Fiumicino airport. Launched in 2017, the project sees together, thanks to a memorandum of understanding, Aeroporti di Roma, the Caritas of the Diocese of Porto-Santa Rufina and the Parish of the airport, and allows the homeless of the airport the opportunity to receive assistance .
Edited from Vatican News and Vatican va
Posted by Jesus Caritas Est at 5:18 PM No comments:

Pope Francis "God wants to save everyone..." with Balloon Release for Peace - FULL TEXT at Angelus + Video

Last Sunday the liturgy had proposed to us the episode of the synagogue of Nazareth, where Jesus reads a passage from the prophet Isaiah and finally reveals that those words are fulfilled "today" in him. Jesus presents himself as the one on whom he laid himself. Spirit of the Lord, the Holy Spirit who consecrated him and sent him to fulfill the mission of salvation for humanity. The Gospel of today (cf. Lk 4: 21-30) is the continuation of that story and shows us the amazement of his fellow citizens in seeing that one of their country, "the son of Joseph" (v.22), claims to be the Christ, the envoy of the Father.

Jesus, with his ability to penetrate minds and hearts, immediately understands what his fellow citizens think. They believe that, since he is one of them, he must demonstrate this strange "claim" by doing miracles there, in Nazareth, as he did in neighboring countries (see verse 23). But Jesus does not want and can not accept this logic, because it does not correspond to God's plan: God wants faith, they want miracles, signs; God wants to save everyone, and they want a Messiah to their advantage. And to explain the logic of God, Jesus brings the example of two great ancient prophets: Elijah and Elisha, whom God had sent to heal and save non-Jewish people, of other peoples, but who had trusted his word.

Faced with this invitation to open their hearts to the gratuitousness and universality of salvation, the citizens of Nazareth rebel, and even assume an aggressive attitude, which degenerates to the point that "they got up and drove him out of the city and led him on the edge of the mountain [...], to throw it down "(v. 29). The admiration of the first moment has changed into an aggression, a rebellion against Him.

And this Gospel shows us that the public ministry of Jesus begins with a rejection and with a threat of death, paradoxically on the part of his fellow citizens. Jesus, in living the mission entrusted to him by the Father, knows that he must face fatigue, rejection, persecution and defeat. A price that, yesterday like today, the authentic prophecy is called to pay. The harsh rejection, however, does not discourage Jesus, nor does it stop the path and fruitfulness of his prophetic action. He goes on his way (see verse 30), trusting in the love of the Father.

Even today, the world needs to see in the disciples of the Lord of the prophets, that is, of the courageous and persevering people in responding to the Christian vocation. People who follow the "push" of the Holy Spirit, who sends them to proclaim hope and salvation to the poor and excluded; people who follow the logic of faith and not of miraculousness; people dedicated to the service of all, without privileges and exclusions. In short: people who are open to accepting in themselves the will of the Father and are committed to witnessing it faithfully to others.

Let us pray to Mary Most Holy, so that we may grow and walk in the same apostolic zeal for the Kingdom of God that animated the mission of Jesus.

with great concern I follow the humanitarian crisis in Yemen. The population is exhausted by the long conflict and many children suffer from hunger, but it is not possible to access food stores. Brothers and sisters, the cry of these children and their parents rises before God. I appeal to the interested parties and to the international community to urgently encourage compliance with the agreements reached, to ensure the distribution of food and to work for the good of the population. I invite everyone to pray for our brothers in Yemen. "Ave or Maria, ...". We pray strongly, because they are children who are hungry, thirsty, have no medicines and are in danger of death. We bring this thought home with us.

Today is celebrated in Italy the Day for Life, which has as its theme "It's life, it's the future". I associate myself with the message of the Bishops and I express my encouragement to the ecclesial communities that in many ways promote and sustain life. It becomes increasingly necessary a concrete commitment to promote births, which involves the institutions and the various cultural and social realities, recognizing the family as the generative womb of society.

On February 5th, in the Far East and in various parts of the world, millions of men and women will celebrate the Lunar New Year. I would like to greet everyone warmly, hoping that in their families those virtues are practiced that help us to live in peace with ourselves, with others and with creation. Invitation to pray for the gift of peace, to welcome and nurture with the contribution of each one.
I greet all of you, Romans and pilgrims. In particular, the faithful came from Croatia and Poland; those of Lecce, Potenza, Cerignola, San Benedetto del Tronto and Castelliri. I greet the Sisters Pious Disciples of the Divine Master and the parish choir of Claut (Pordenone).

With great affection I greet the boys and girls of the Catholic Action of the Diocese of Rome. Dear children, I am pleased to welcome you, together with the Cardinal Vicar, to assistant priests, to your parents and educators, at the end of the "Caravan of Peace". With this initiative, open the celebrations for the 150th anniversary of the foundation of Catholic Action in Rome and the 50th anniversary of the birth of the ACR. I wish you to be joyful witnesses of peace and fraternity. Now let's listen together to the message that your friends, here next to me, will read us.

And now the balloons will rise to the sky, a symbol of our prayers for peace in the world.

[launch of the balloons]

In less than an hour I will leave for a short but important trip to the United Arab Emirates. Please, accompany me with prayer. Good Sunday everyone. Good lunch and goodbye!
Posted by Jesus Caritas Est at 11:13 AM No comments: