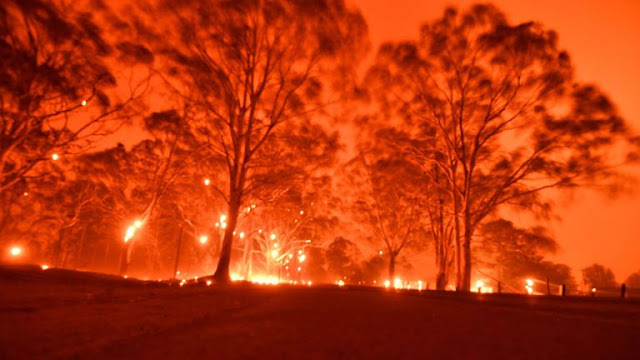 UPDATED Death Toll to 18 people killed as reported by ABC News.
NBC News reports that an emergency declaration was also made in the Australian Capital Territory, which includes Canberra, in response to thick smoke and dangerously poor air quality.

Conditions are anticipated to worsen in the coming days. Australia's Bureau of Meteorology said temperatures are expected to soar above 104 degrees in western parts of the country Thursday, while similar temperatures are forecast in parts of New South Wales and Victoria into the weekend.

The fires are in part the result of a prolonged drought. The months of January through November were the second driest period on record since 1902, the Bureau of Meteorology said.

Average rainfall has also been down most months nationwide since early 2017. New South Wales, in particular, has seen three years of rainfall falling short by about 5 inches of the historic average.

The country also recorded its hottest day in mid-December at 107.4 degrees.

In addition to the fires, the drought has left the country with low drinking water supplies. Its total storage was sitting at only 45.8 percent as of Wednesday, down 8 percent from last year. New South Wales is seeing the worst levels, with water storage down to 24.5 percent.

Experts warn that these extreme weather conditions are a mark of climate change.
Edited from NBC News
Posted by Jesus Caritas Est at 4:02 PM