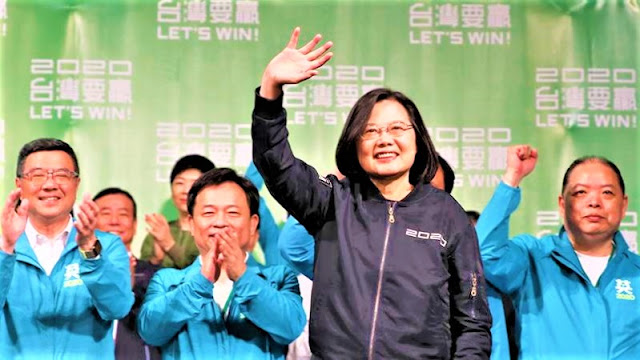 Taiwan, Tsai Ing-wen wins second term as president
Over 8 million votes;  about 2.5 million more than her main rival.  Her party maintains a majority in parliament.  The outcome of the elections gives the president a mandate to continue her current policy towards China.  "I hope Beijing understands that Taiwan will not give in to threats and intimidation."

Taipei (AsiaNews / Agencies) - Taiwanese President Tsai Ing-wen has won her second term at the helm of the country, thanks to an overwhelming victory in an electoral race dominated by themes such as national sovereignty, democracy and future relations between Taipei and Beijing.

In the elections two days ago, Tsai of the Democratic Progressive Party (Dpp), obtained over 8 million preferences;  about 2.5 million more than her main rival, Han Kuo-yu of the Kuomintang of China (Kmt), who proposed closer relations with mainland China.  The third candidate, James Soong Chu-yu of the People First Party (Pfp), received less than 600,000 votes.

In 2016, her first presidential victory, the Taiwanese leader had been voted by 6.9 million citizens.  The day before yesterday, they were also called to determine the composition of the parliament: the DPP achieved a great victory in the legislative elections, winning 61 seats compared to the KMT's 38 .  The result means that the ruling party will retain a majority in the legislative Yuan.  According to analysts, this outcome gives Ms Tsai a mandate to continue her current policy towards China, despite the differences with the KMT and the strong opposition from Beijing.

The president rejects the Chinese government's idea that Taiwan is part of "one China".  Since her first term, Beijing has tightened the screw;  cut off official communications with the Taiwanese government and increased economic and military pressure.  China also snatched seven of the few remaining diplomatic allies from Taiwan, hoping that this would persuade Taiwanese voters to punish Tsai at the polls.

"Peace means that China must abandon threats of force against Taiwan,” Tsai said as she declared victory in Taipei.  “I also hope that the Beijing authorities understand that democratic Taiwan, and our democratically elected government, will not concede to threats and intimidation,” Tsai added. She continued that cross-strait relations should be based on “peace, equality, democracy and dialogue".  Promising that in the next four years she will avoid provoking Beijing, Tsai then said that Taiwan would like to become "partner" and not "a problem" for her neighbors.  Finally, the Taiwanese head of state declined to comment on the Hong Kong protests, but said he believed that "friends from Hong Kong will also be happy [with the election result]".

Among the supporters who flocked outside Tsai Ing-wen's headquarters to celebrate its success, there were dozens of Hong Kongers who waved flags and sang pro-democracy slogans.  Since the protests began in the former British colony, around 200 protesters have fled to Taiwan for fear of arrest.  Taiwan's Continental Affairs Council says that around 30 delegations, for a total of 700 people, have visited the island in an official capacity to follow and express support for Tsai during the elections.  The visitors came from political parties, civil groups and associations.  About 100 of them were district councilors.

The day after her re-election, Tsai met with the de facto ambassadors of the United States and Japan.  In her meeting with William Brent Christensen, director of the American Institute in Taiwan, Tsai asked to deepen cooperation between Taipei and Washington on security and economic issues.  The president then spoke to Mitsuo Ohashi, telling the president of the Japan-Taiwan Trade Association that Taipei managed cross-strait relations "by refusing to bow to pressure."

Beijing's reactions to the election results were not long in coming.  Already on Saturday evening, the Chinese Office for Taiwan Affairs reiterated that the government will continue to promote the "one country, two systems" model for the island.  The following day, the Chinese Ministry of Foreign Affairs said that "regardless of changes in Taiwan's internal situation, the fundamental fact that there is only one China and that Taiwan is part of it will not change."  The note states that Beijing will not change its position by sticking to the "one China" principle and opposing Taiwan's independence.  China, concludes the ministry, hopes that the world will understand and support the "just cause" of the Chinese people in opposing secessionist activities and "bring about national reunification".
Full Text Source: Asia News IT
Posted by Jesus Caritas Est at 11:05 AM