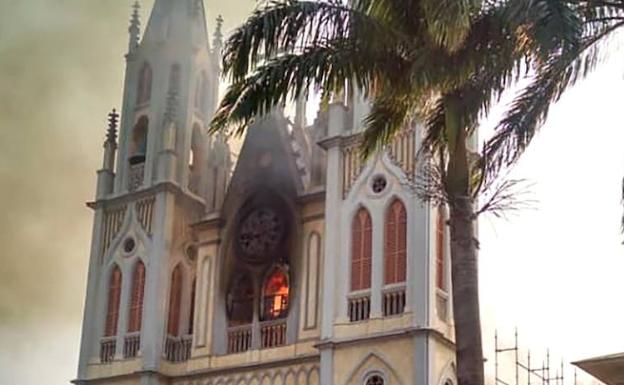 Built in a neo-gothic style between 1897 and 1916, the cathedral is one of the country's main tourist attractions.
Dozens of people gathered in silence near the cathedral in the early evening as the fire service sprayed water jets onto the century-old structure.

"We have just extinguished the fire, it's finished. The roof is gone, it is a catastrophe," firefighter Alfredo Abeso told AFP. Another firefighter at the scene said: "The whole roof is gone, the interior is burned." The cause of the fire is not known but the cathedral has been closed to the public since January 7 for restoration work.

The French Embassy in Malabo said the fire was a "cruel reminder" of the fire at Notre Dame. "We share the emotion of our friends in Malabo and Equatorial Guinea and hope that the fire can be brought under control quickly," it said on Twitter.

Paris engineers are still working to stabilise the 13th century cathedral in the French capital after fire tore through its roof and dramatically toppled its spire last year.
Source: AFP - News18.com - Image Source: Google Images
Notiulti.com reports the remodeling work was due to end next July, according to the forecast of the archbishop of Malabo, Juan Nsue Edang. The president of the African country, Teodoro Obiang, gave last year to the Archdiocese of Malabo about three million euros for the rehabilitation of the Cathedral.
Posted by Jesus Caritas Est at 8:00 AM