#BreakingNews Pope Emeritus Benedict XVI asks for his Name to be removed as Co-Author from Celibacy book and Card. Sarah clarifies 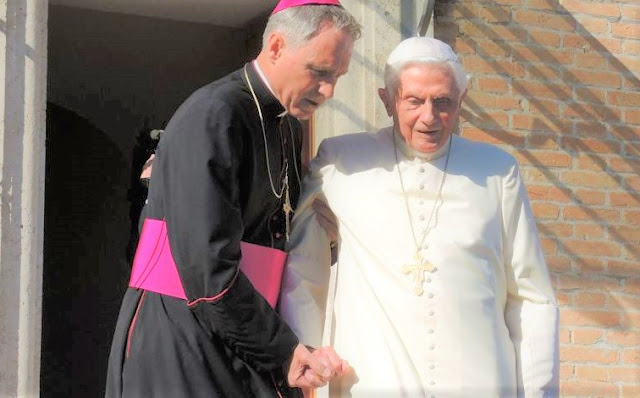 The book on priestly celibacy: a clarification by Archbishop Gänswein
The Prefect of the Papal Household and Personal Secretary of the Pope Emeritus says that Benedict XVI had not authorized the joint signature as co-author of Cardinal Sarah’s essay on priestly celibacy.
By Vatican News

Archbishop Georg Gänswein, Prefect of the Papal Household and Personal Secretary of the Pope Emeritus has issued a statement to the KNA and Ansa news agencies, regarding the book on priestly celibacy, carrying the signatures of Benedict XVI and Cardinal Robert Sarah, to be published tomorrow in France,

"I can confirm that this morning, at the indication of the Pope emeritus, I asked Cardinal Robert Sarah to contact the publishers of the book requesting them to remove the name of Benedict XVI as co-author of the book itself, and also to remove his name from the introduction and conclusions".

"The Pope emeritus in fact knew the Cardinal was preparing a book”, Archbishop Gänswein added, “and had sent a short text of his on the priesthood”, authorizing the Cardinal to use it as he wished. But the Pope emeritus “had not approved any project for a co- signed book, nor had he seen and authorized the cover. It was a misunderstanding, without questioning the good faith of Cardinal Sarah".
Above Full Text Release from Vatican News.va
Catholic News Service explained that Cardinal Sarah Tweeted today, in clarification, that the book would now have Benedict XVI as a contributor to the book:

"Considering the polemics provoked by the publication of the book, 'From the Depths of Our Hearts,' it has been decided that the author of the book for future editions will be Cardinal Sarah, with the contribution of Benedict XVI," Cardinal Sarah tweeted Jan. 14.
"However," he said, "the full text remains absolutely unchanged."