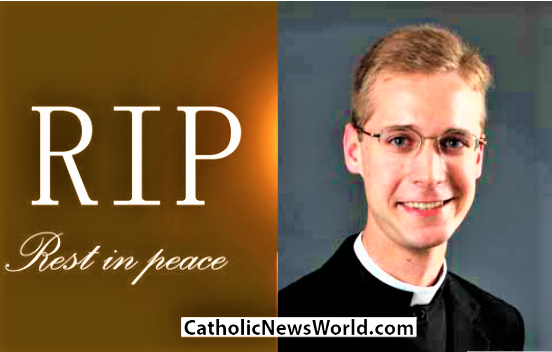 A priest named Fr. Evan Harkins of St. James Parish has died by suicide, according to the Diocese of Kansas City-St. Joseph. The Director of Communications Jeremy Lillig said the diocese was notified this morning of the death of Fr. Evan Harkins after he did not show up for Mass. The diocesan statement said Fr. Harkins had apparently taken his own life.
The Diocese asked for prayer:

"In the face of this devastatingly tragic news, we ask that you pray for Fr. Harkins, his family, and the parish and school communities that he served as well as all of our priests,"  in a statement. Fr. Harkins was Pastor at St. James Parish and Parochial Administrator at St. Patricks' Parish in St. Joseph. He had been at St. James since 2012.
Press Release: https://kcsjcatholic.org/2020/01/statement-harkins/
Below is the Vocation Story of Fr. Harkins from The Catholic Key:

KANSAS CITY — He was eight years old, fascinated and inspired by the lives of the saints, especially 14-year-old Dominic Savio. Evan Harkins was washing the dishes after lunch one afternoon when he suddenly thought about becoming a priest.

“It was the first time I had thought about it,” he said. “There was a certain excitement at the initial connection of the priesthood to my life and I ran to tell my mother. She was happy and told me so.” Now, 16 years later, Rev. Mr. Evan Patrick Harkins will be ordained a priest for the Diocese of Kansas City-St. Joseph by Bishop Robert W. Finn, May 29 at the Cathedral of the Immaculate Conception. He’s still excited about it.
Evan Harkins, the eldest of five children, attended St. James Church in Midtown until his family moved into St. Sabina Parish in Belton when he was eight. He had attended the French Magnet school for kindergarten and first grade as his parents wanted him to learn the language. After the move to Belton, he was homeschooled, originally to catch up in English, but the experience was so good, his parents continued to home school Evan and his younger siblings.
With his parents’ encouragement and support he started at St. Thomas Seminary High School in Hannibal, Mo., as a freshman. “I was fortunate,” he recalled. “My folks told me, ‘We’re happy and will support you whatever you do. If the priesthood is not what God is calling you to do, we’ll still be proud of you.’ There was no pressure.”
The seminary high school was closed at the end of his junior year, and along with a couple of other students, Evan was allowed to graduate early. He then enrolled at Conception Seminary College.
“My thoughts of the priesthood had been healthily growing all this time,” he said. “One of the things that inspired me was the selfless love my parents have for each other. I saw holiness lived out in the things they did — things Mother did at home that Dad never knew about. My parents were receptive to the miraculous grace of marriage. Having known and watched them as I was growing up helped bring thoughts of the priesthood to the forefront for me.”
After graduating from Conception Seminary College, Evan was accepted at Kenrick Seminary in St. Louis for his four years of Theology. “I’ve had 11 years of Missouri seminaries,” he said with a grin, “all levels. Is that unusual?”
Rev. Mr. Harkins graduated earlier this month and came home for a few weeks before ordination. He received a dispensation through Bishop Finn to be ordained 2 ½ months before he turns 25, usually the earliest a priest can be ordained. He’s excited and a little nervous. He had some parish work experience during his years as a seminarian, but this will be different. “It’s new,” he said, “but it’s what I’ve been studying for all these years. There’s peace in that. I will still be learning the day-to-day duties and eventually how to make the decisions for a parish.” He expects his years as a Boy Scout will stand him in good stead in pastoral and priestly work and community outreach.
His family — parents, brothers and sisters and “my absolutely thrilled grandmother” — and friends will witness his ordination: members of the Serra Club, the Diocesan Council of Catholic Women and the Blue Army.
He credits the prayers of the Serrans, the DCCW and the Blue Army for helping him stay the course during his years in the seminary. “I don’t know that I would have made it without their prayers,” he said.
“I would go to all-night vigils with the Blue Army while I was discerning, and I grew in devotion to Our Lady. Through her intercession I grew in holiness. A priest stands in the person of Christ, absolving sin, and in the person of Christ saying ‘This is my body.’ Therefore we should be as Christ-like as possible, and part of that is drawing close to His mother, Our Lady.”
A priest brings Christ to others, he said. “He brings the channels of Christ’s grace to the sacraments: New life through baptism; absolution through the sacrament of Penance, His love for us and His grace through the Eucharist. A priest is a bridge connecting people to God in a sacramental way, and he extends Christ’s love for His Church, in a human way.
I see a lot of pain and sadness in the world. You can see in people’s eyes. Satan makes people unsure of who they are. To me being ordained a priest is to be sent out in to the world to give God to people and His gifts of joy and truth. I think that’s awesome; there is nothing beyond that I could want.”
Posted by Jesus Caritas Est at 10:08 PM

Is this where Father studied? https://www.kansascity.com/news/local/crime/article233562252.html