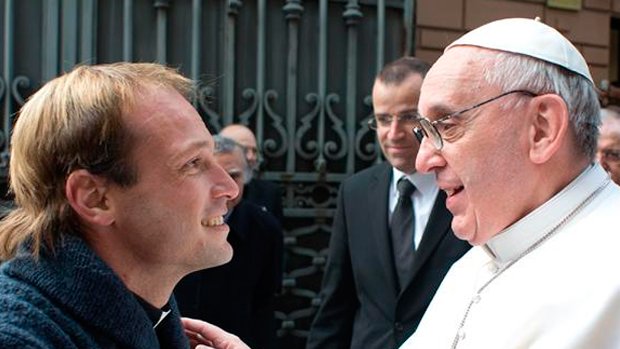 Father Aemilius is the Pope's new Personal Secretary
The Uruguayan priest, whom Pope Francis has known since 2006, is chosen to take the place left open by Father Pedacchio last December.
By Vatican News

Pope Francis and the Uruguayan priest, Gonzalo Aemilius, have known each other since 2006, since Cardinal Jorge Mario Bergoglio, Archbishop of Buenos Aires, made contact with him because he had heard of Father Aemilius’  work with street kids.

Gonzalo Aemilius, a Doctor of Theology, is the Pope's new Special Secretary. He takes the place of Father Fabian Pedacchio, the Argentine priest who worked alongside the Pope from 2013 to 2019, and who returned last December to his post at the Congregation of Bishops.

Father Aemilius was born in Montevideo on 18 September 1979 and was ordained a priest on 6 May 2006.

His face may be familiar to many because he is the one, who the Pope greeted and summoned to him when he was part of the crowd gathered outside a Vatican Gate to welcome Pope Francis at the beginning of his pontificate on the morning of 17 March 2013. He recognized him and invited him to accompany him into the church where he was about to celebrate his first Mass with the faithful after his election. At the end of the liturgy, Pope Francis introduced Father Aemilius to all those present, asking them to pray for him and for his work with street children.

Interviewed by the “Osservatore Romano” on the following day, Father Aemilius said that Archbishop Bergoglio's ability to integrate different values and channel them in a single direction had struck him deeply: “Experiencing this ability of his was decisive in my life," he said, "He taught me to take the best that is in each individual, however different he or she may be from others, and to put it to good use for the good of all".