Pope Francis explains " hospitality is important...it means recognizing that other Christians are truly our brothers and sisters in Christ." Full Text" 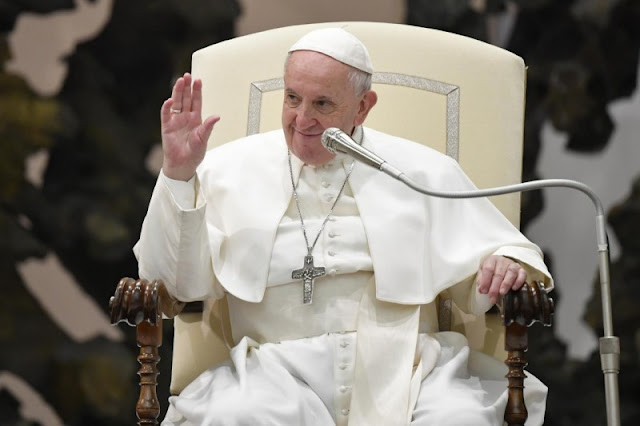 Catechesis: Week of prayer for Christian unity. "They treated us kindly" (cf Acts 28.2)

Today's catechesis is in tune with the Week of Prayer for Christian Unity. This year's theme, which is that of hospitality, has been developed by the communities of Malta and Gozo, starting from the passage of the Acts of the Apostles which narrates the hospitality reserved by the inhabitants of Malta in São Paulo and his companions travel, shipwrecked together with him. It was precisely this episode that I referred to in the catechesis of two weeks ago.

So let's start from the dramatic experience of that shipwreck. The ship on which Paolo travels is at the mercy of the elements. For fourteen days they have been at sea, drifting, and since neither the sun nor the stars are visible, travelers feel disoriented, lost. Below them, the sea breaks violently against the ship and they fear that it will break under the force of the waves. From above they are lashed by the wind and rain. The force of the sea and the storm is terribly powerful and indifferent to the fate of the sailors: there were more than 260 people!

But Paul who knows it is not like that, speaks. Faith tells him that his life is in the hands of God, who raised Jesus from the dead, and that he called him, Paul, to bring the Gospel to the ends of the earth. His faith also tells him that God, according to what Jesus revealed, is a loving Father. Therefore Paul addresses his traveling companions and, inspired by faith, announces to them that God will not allow a hair of their head to be lost.

This prophecy comes true when the ship runs aground on the coast of Malta and all passengers safely reach dry land. And there they experience something new. In contrast to the brutal violence of the stormy sea, they receive the testimony of the "rare humanity" of the inhabitants of the island. These people, foreign to them, are attentive to their needs. They light a fire to warm up, offer them shelter from rain and food. Even if they have not yet received the Good News of Christ, they manifest the love of God in concrete acts of kindness. In fact, spontaneous hospitality and caring gestures communicate something of God's love. And the hospitality of the Maltese islanders is rewarded by the healing miracles that God works through Paul on the island. Therefore, if the people of Malta were a sign of God's Providence for the Apostle, he too was a witness of God's merciful love for them.

Dear ones, hospitality is important; and it is also an important ecumenical virtue. First of all, it means recognizing that other Christians are truly our brothers and sisters in Christ. We are brothers. Someone will say to you: "But that is Protestant, the Orthodox one ..." Yes, but we are brothers in Christ. It is not an act of one-way generosity, because when we host other Christians we welcome them as a gift that is given to us. Like the Maltese - good these Maltese - we are repaid, because we receive what the Holy Spirit has sown in our brothers and sisters, and this becomes a gift for us too, because the Holy Spirit also sows his graces everywhere. Welcoming Christians from another tradition means first of all showing God's love for them, because they are children of God - our brothers -, and also means welcoming what God has accomplished in their lives. Ecumenical hospitality requires willingness to listen to others, paying attention to their personal stories of faith and the history of their community, a community of faith with another tradition different from ours. Ecumenical hospitality involves the desire to know the experience that other Christians have of God and the expectation of receiving the spiritual gifts that derive from it. And this is a grace, discovering this is a grace. I think of past times, of my land for example. When some evangelical missionaries came, a small group of Catholics went to burn the tents. This is not: he is not a Christian. We are brothers, we are all brothers and we must make each other hospitality.

Today, the sea on which Paul and his companions were shipwrecked is once again a dangerous place for the lives of other sailors. All over the world migrant men and women face risky journeys to escape violence, to escape war, to escape poverty. How Paul and his companions experience indifference, the hostility of the desert, rivers, seas ... Many times they don't let them land in ports. But, unfortunately, sometimes they also encounter far worse hostility than men. They are exploited by criminal traffickers: today! They are treated as numbers and as a threat by some rulers: today! Sometimes hospitality rejects them as a wave towards poverty or the dangers from which they fled.

We, as Christians, must work together to show migrants the love of God revealed by Jesus Christ. We can and must testify that there is not only hostility and indifference, but that every person is precious to God and loved by him. The divisions that still exist between us prevent us from being fully the sign of God's love. Working together to experience ecumenical hospitality, especially to those whose lives are most vulnerable, will make us all Christians - Protestants, Orthodox, Catholics, all Christians - better human beings, better disciples and a more united Christian people. It will bring us closer to unity, which is God's will for us.

On January 25, in the Far East and in various other parts of the world, many millions of men and women will celebrate the lunar new year.

I send them my cordial greeting, in particular wishing families to be places of education for the virtues of hospitality, wisdom, respect for each person and harmony with creation.

I invite everyone to pray also for peace, for dialogue and for solidarity between nations: gifts that are ever more necessary for today's world.

I cordially welcome the Italian-speaking faithful. In particular, I greet the Sisters of Saint Joseph of Chambéry and the young people of the Focolare Movement.

I also greet the pilgrims from the Diocese of Termoli-Larino, accompanied by the Bishop, Mons. Gianfranco De Luca; the parishes, in particular those of Gesualdo and Aprilia; the Italian Financial Group of Milan; the Musadoc Cultural Association of Rome; and that of Villafranca Sicula.

Lastly, I greet the young, the elderly, the sick and newlyweds. Next Saturday we will celebrate the Feast of the Conversion of San Paolo. May the example of the Apostle of the Gentiles support us in the mission of announcing the salvation of Christ to all, committing our best energies.