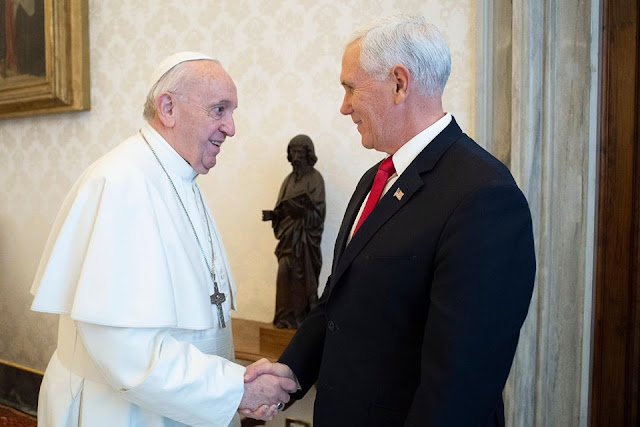 Pope Francis on Friday met with Mike Pence, Vice President of the United States, in the Vatican. Mike Pence was baptized a Catholic and  told the pope by meeting him, he has become a hero, a comment likely referring to his devout Catholic mother. Mike Pence came with his wife Karen and Daughter-in-law Sarah Pence. (See Video Below)
During their meeting, the Pope handed Vice President Pence a copy of his World Peace Day Message. In his Message, Pope Francis invites us to help build peace, promoting a more just, supportive and fraternal world, because even today the scars of war "affect especially the poor and the vulnerable".

Mike Pence gave the pope a cross made from a tree in the garden at the Vice President's residence. The Pope gave Pence a large medallion made in the Vatican with the angel of peace. The pope went on to explain that the angel on the medallion already conquered the demon of war.
Upon leaving, Pope Francis told VP Pence, "You will pray for me, don't forget. I won't forget and I already do. This role is not easy."
After having met the Pope, Vice President Mike Pence met with the Vatican's Secretary of State, Cardinal pietro Parolin, and with Archbishop Paul Richard Gallagher, the Vatican's Secretary for Relations with States.
Posted by Jesus Caritas Est at 8:55 AM