Pope Francis says "...at the table of a Christian house there is always a plate...for the passing friend or the needy.." at Vespers for Christian Unity 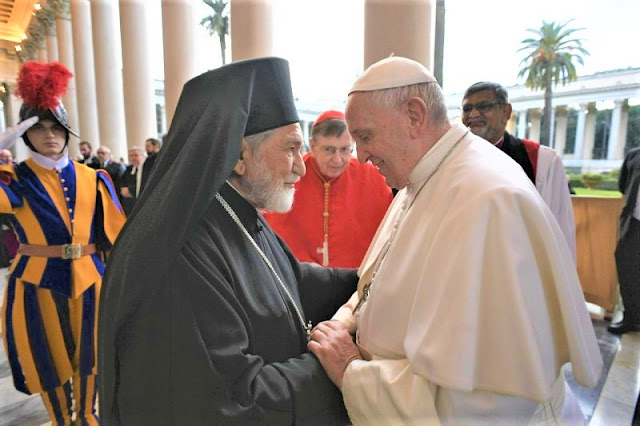 SOLEMNITY OF THE CONVERSION OF SAINT PAUL THE APOSTLE

Basilica of Saint Paul outside the Walss
Saturday, January 25, 2020


On board the ship that brings Paolo prisoner to Rome there are three different groups. The most powerful is made up of soldiers, subjected to the centurion. Then there are the sailors, on whom of course all sailors depend on the long journey. Finally, there are the weakest and most vulnerable: the prisoners.

When the ship runs aground near the coast of Malta, after having been at the mercy of the storm for several days, the soldiers plan to kill the prisoners to make sure no one escapes, but are stopped by the centurion, who wants to save Paul. In fact, despite being among the most vulnerable, Paul had offered something important to his traveling companions. While everyone was losing all hope of survival, the Apostle had brought an unexpected message of hope. An angel had reassured him by saying: "Do not be afraid, Paul: God wanted to keep all your fellow travelers" (Ac 27.24).

Paul's trust is well founded and in the end all the passengers are saved and, once they arrive in Malta, they experience the hospitality of the inhabitants of the island, their kindness and humanity. From this important detail the theme of the Week of Prayer which ends today has been taken.

Dear brothers and sisters, this narration of the Acts of the Apostles also speaks to our ecumenical journey, directed towards that unity which God ardently desires. In the first place, it tells us that those who are weak and vulnerable, those who have materially little to offer but who found their wealth in God can give precious messages for the good of all. Think of the Christian communities: even the smallest and least relevant ones in the eyes of the world, if they experience the Holy Spirit, if they live love for God and neighbor, have a message to offer to the entire Christian family. We think of the Christian communities marginalized and persecuted. As in the story of Paul's shipwreck, it is often the weakest who carry the most important message of salvation. Because God liked it this way: to save us not with the strength of the world, but with the weakness of the cross (cf. 1 Cor 1,20-25). As disciples of Jesus, we must therefore be careful not to be attracted by worldly logics, but rather to listen to the little ones and the poor, because God loves to send his messages through them, who most resemble his Son made man.

The account of the Acts reminds us of a second aspect: the priority of God is the salvation of all. As the angel says to Paul: "God wanted to keep you all your sailing companions". It is the point on which Paul insists. We too need to repeat it: it is our duty to implement the priority desire of God, who, as Paul himself writes, "wants all men to be saved" (1 Tim 2: 4).

It is an invitation not to dedicate ourselves exclusively to our communities, but to open ourselves to the good of all, to the universal gaze of God, who incarnated himself to embrace the whole human race, and who died and rose for the salvation of all. If, with his grace, we assimilate his vision, we can overcome our divisions. In Paul's shipwreck, each contributes to the salvation of all: the centurion makes important decisions, the sailors put their knowledge and skills to use, the Apostle encourages those who are hopeless. Even among Christians, each community has a gift to offer to others. The more we look beyond partisan interests and overcome the legacies of the past in the desire to advance towards the common landing, the more spontaneous we will be to recognize, welcome and share these gifts.

And we come to a third aspect, which was at the center of this week of prayer: hospitality. In the last chapter of the Acts of the Apostles, Saint Luke says about the inhabitants of Malta: "They treated us kindly", or "with rare humanity" (v. 2). The fire lit on the shore to warm the castaways is a beautiful symbol of the human warmth that unexpectedly surrounds them. Even the governor of the island proves welcoming and hospitable with Paolo, who reciprocates by healing his father and then many other sick people (cf. vv. 7-9). Finally, when the Apostle and those who were with him left for Italy, the Maltese generously supplied them with supplies (v. 10).

From this week of prayer we would like to learn to be more hospitable, first of all among us Christians, even among brothers of different confessions. Hospitality belongs to the tradition of Christian communities and families. Our elders have taught us by example that at the table of a Christian house there is always a plate of soup for the passing friend or the needy who knocks.
And in monasteries the guest is treated with great respect, as if he were Christ. Let's not lose, on the contrary, let's revive these customs that know about the Gospel!

Dear brothers and sisters, with these sentiments I address my cordial and fraternal greetings to His Eminence Metropolitan Gennadios, representative of the Ecumenical Patriarchate, to His Grace Ian Ernest, personal representative in Rome of the Archbishop of Canterbury, and to all the representatives of the various Churches and ecclesial communities gathered here. I also greet the students of the Ecumenical Institute of Bossey, visiting Rome to deepen their knowledge of the Catholic Church, and the Eastern Orthodox and Orthodox youth who study here with a scholarship from the Cultural Collaboration Committee with the Orthodox Churches, operating at the Pontifical Council for the Promotion of Christian Unity, which I greet and thank. Together, without ever getting tired, we continue to pray to invoke the gift of full unity among us from God.
Source: Vatican.va
Posted by Jesus Caritas Est at 2:31 PM