Saint January 13 : St. Hilary of Poitiers a Bishop of Poitiers who Converted from Paganism after studying Scripture 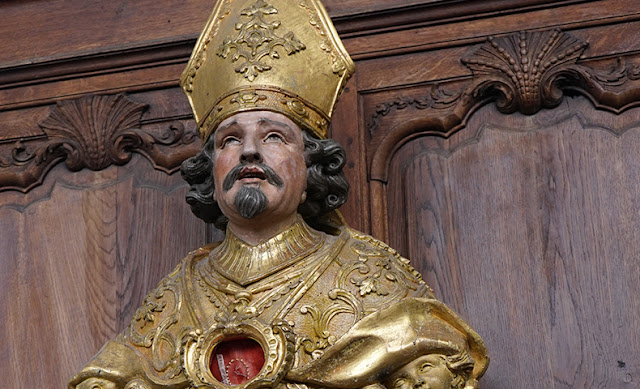 Bishop, born in that city at the beginning of the fourth century; died there 1 November, according to the most accredited opinion, or according to the Roman Breviary, on 13 January, 368. Belonging to a noble and very probably pagan family, he was instructed in all the branches of profane learning, but, having also taken up the study of Holy Scripture and finding there the truth which he sought so ardently, he renounced idolatry and was baptized. Thenceforth his wide learning and his zeal for the Faith attracted such attention that he was chosen about 350 to govern the body of the faithful which the city had possessed since the third century. We know nothing of the bishops who governed this society in the beginning. Hilary is the first concerning whom we have authentic information, and this is due to the important part he played in opposing heresy. The Church was then greatly disturbed by internal discords, the authority of the popes not being so powerful in practice as either to prevent or to stop them. Arianism had made frightful ravages in various regions and threatened to invade Gaul, where it already had numerous partisans more or less secretly affiliated with it. Saturninus, Bishop of Arles, the most active of the latter, being exposed by Hilary, convened and presided over a council at Béziers in 356 with the intention of justifying himself, or rather of establishing his false doctrine. Here the Bishop of Poitiers courageously presented himself to defend orthodoxy, but the council, composed for the most part of Arians, refused to hear him, and being shortly afterwards denounced to the Emperor Constantius, the protector of Arianism, he was at his command transported to the distant coasts of Phrygia.

But persecution could not subdue the valiant champion. Instead of remaining inactive during his exile he gave himself up to study,  completed certain of his works which he had begun, and wrote his treatise on the synods. In this work he analysed the professions of faith uttered by the Oriental bishops in the Councils of Ancyra, Antioch, and Sirmium, and while condemning them, since they were in substance Arian, he sought to show that sometimes the difference between the doctrines of certain heretics and orthodox beliefs was rather in the words than in the ideas, which led to his counselling the bishops of the West to be reserved in their condemnation. He was sharply reproached for his indulgence by certain ardent Catholics, the leader of whom was Lucifer, Bishop of Cagliari. However, in 359, the city of Seleucia witnessed the assembly in synod of a large number of Oriental bishops, nearly all of whom were either Anomoeans or Semi-Arians. Hilary, whom everyone wished to see and hear, so great was his reputation for learning and virtue, was invited to be present at this assembly. The governor of the province even furnished him with post horses for the journey. In presence of the Greek fathers he set forth the doctrines of the Gallic bishops, and easily proved that, contrary to the opinion current in the East, these latter were not Sabellians. Then he took part in the violent discussions which took place between the Semi-Arians, who inclined toward reconciliation with the Catholics, and the Anomoeans, who formed as it were the extreme left of Arianism.
After the council, which had no result beyond the wider separation of these brothers in enmity, he left for Constantinople, the stronghold of heresy, to continue his battle against error. But while the Semi-Arians, who were less numerous and less powerful, besought him to become the intermediary in a reconciliation between themselves and the bishops of the West, the Anomoeans, who had the immense advantage of being upheld by the emperor, besought the latter to send back to his own country this Gallic bishop, who, they said, sowed discord and troubled the Orient. Constantius acceded to their desire, and the exile was thus enabled to set out on his journey home. In 361 Hilary re-entered Poitiers in triumph and resumed possession of his see. He was welcomed with the liveliest joy by his flock and his brothers in the episcopate, and was visited by Martin, his former disciple and subsequently Bishop of Tours. The success he had achieved in his combat against error was rendered more brilliant shortly afterwards by the deposition of Saturninus, the Arian Bishop of Arles by whom he had been persecuted. However, as in Italy the memory still rankled of the efforts he had made to bring about a reconciliation between the nearly converted Semi-Arians and the Catholics, he went in 364 to the Bishop of Vercelli to endeavour to overcome the intolerance of the partisans of the Bishop Lucifer mentioned above. Almost immediately afterwards, that it might be seen that, if he was full of indulgence for those whom gentleness might finally win from error, he was intractable towards those who were obstinate in their adherence to it, he went to Milan, there to assail openly Auxentius, the bishop of that city, who was a firm defender of the Arian doctrines. But the Emperor Valentinian, who protected the heretic, ordered Hilary to depart immediately from Milan.
He then returned to his city of Poitiers, from which he was not again to absent himself and where he was to die. This learned and energetic bishop had fought against error with the pen as well as in words. The best edition of his numerous and remarkable writings is that published by Dom Constant under the title: "Sancti Hilarii, Pictavorum episcopi opera, ad manuscriptos codices gallicanos, romanos, belgicos, necnon ad veteres editiones castigata" (Paris, 1693). The Latin Church celebrates his feast on 14 January, and Pius IX raised him to the rank of Doctor of the Universal Church. The Church of Puy glories in the supposed possession of his relics, but according to one tradition his body was borne to the church of St-Denys near Paris, while according to another it was taken from the church of St-Hilaire at Poitiers and burned by the Protestants in 1572.