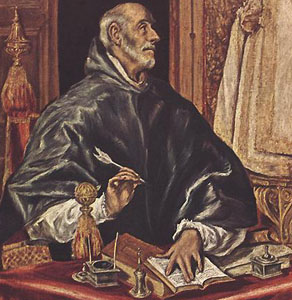 
The literary work of Ildephonsus is better known than the details of his life, and merits for him a distinguished place in the roll of Spanish writers. His successor, Julianus of Toledo, in the notice already referred to, informs us that the saint himself divided his works into four parts. The first and principal division contained six treatises, of which two only have been preserved: "De virginitate perpetuâ sanctae Mariae adversus tres infideles" (these three unbelievers are Jovinianus, Helvidius, and "a Jew"), a bombastic work which displays however a spirit of ardent piety, and assures Ildephonsus a place of honour among the devoted servants of the Blessed Virgin; also a treatise in two books: (1) "Annotationes de cognitione baptismi", and (2) "Liber de itinere deserti, quo itur post baptismum". Recent researches have proved that the first book is only a new edition of a very important treatise compiled, at the latest, in the sixth century, Ildephonsus having contributed to it only a few additions (Helfferich, "Der westgothische Arianismus", 1860, 41-49). The second part of his works contained the saint's correspondence; of this portion, there are still preserved two letters of Quiricus, Bishop of Barcelona, with the replies of Ildephonsus. The third part comprised masses, hymns, and sermons; and the fourth, opuscula in prose and verse, especially epitaphs. The editions of the complete works of Ildephonsus contain a certain number of writings, several of which may be placed in either of the last two divisions; but some of them are of doubtful authenticity, while the remainder are certainly the work of another author. Moreover, Julianus states that Ildephonsus began a good number of other works, but his many cares would not permit of his finishing them. On the other hand, he makes no mention of a little work which is certainly authentic, the "De viris illustribus". It may be considered as a supplement to the "De viris illustribus" of Isidore of Seville, and is not so much a literary historical work as a writing intended to glorify the Church of Toledo and defend the rights of the metropolitan see.
Text: The Catholic Encyclopedia