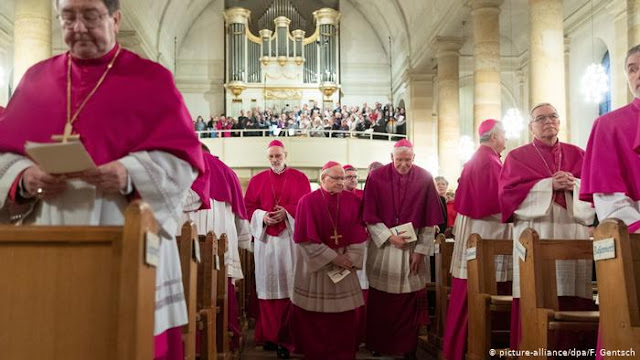 The synodal assembly is one part of the synodal path, which the German bishops agreed to stage at their annual meeting last March. The synodal assembly will include 230 members. It is the highest decision-making body of the synodal path, an effort by the bishops’ conference and lay Central Committee of German Catholics to restore trust following a September 2018 church-commissioned report that detailed thousands of cases of sexual abuse by Catholic clergy over six decades. More than 940 suggestions and questions had been submitted by early January in advance of the Jan. 30-Feb. 1 assembly in Frankfurt. Comments will continue to be accepted through Jan. 23 at the website of the German bishops’ conference. The bishops’ conference and the committee each will send 69 members to the assembly. Decisions of the assembly must be passed by a double two-thirds majority: two-thirds of all participants as well as two-thirds of all members present from the bishops’ conference. (Above excerpt edited from CNS)

The Synodal Path – The history - (Released by Bishops' Conference of Germ.)

The Spring Plenary Assembly of the German Bishops’ Conference from 11 to 14 March 2019 in Lingen was influenced by the so-called MHG study (Research Project “Sexual abuse of minors by catholic priests, deacons and male members of orders in the domain of the German Bishops’ Conference”) on the survey of cases of sexual abuse in the domain of the Catholic Church, which had already shaped the Autumn Plenary Assembly in September 2018.
In the period up to spring 2019, the German bishops in the meetings of the Permanent Council had repeatedly dealt with the question of the consequences of the MHG study. Already in September 2018, the Plenary Assembly declared: “The challenges specific to the Catholic Church, such as the questions of the celibate way of life of priests and various aspects of Catholic sexual morality, will be discussed in a transparent process of dialogue with experts from various disciplines.”
A study day during the Plenary Assembly in Lingen took up questions from the MHG study. Its theme was: “Die Frage nach der Zäsur – Studientag zu übergreifenden Fragen, die sich gegenwärtig stellen” (“The question of the turning-point-study day on overarching questions that currently arise”). The lectures given there were published on dbk.de.
In Lingen it became obvious: shock waves require special procedures. The MHG-study and, as a result, the demand of many for reforms show: the Church in Germany is experiencing a turning point. Faith can only grow and deepen if one becomes free from thinking blockades, if one faces up to the free and open debate and develops the ability to take new positions and to go new ways.
The decision concerning the Synodal Path
For this reason, in Lingen the decision was taken to follow a Synodal Path. The conviction was expressed: the Church needs synodal progress. Pope Francis recommends it. Even the Church in Germany does not start from the beginning. The “Joint Synod of the Dioceses of the Federal Republic of Germany” (“Würzburg Synod”, 1971 to 1975), the “Pastoral Synod of the Catholic Church in the GDR” (1973 – 1975) and also the discussion process of the past years have prepared the ground, also for many challenges of today. Cardinal Reinhard Marx declared in the closing press conference of the Lingen Plenary Assembly that it had been decided “to follow a binding Synodal Path as the Church in Germany, which makes possible a structured debate and takes place in an agreed period of time, together with the Central Committee of German Catholics (ZdK). We will create formats for open debates and commit ourselves to procedures that enable the responsible participation of women and men from our dioceses. We want to be a listening Church. We need the advice of people outside the Church”.

The deliberations of the Central Committee of German Catholics
During its Plenary Assembly on 10 – 11 May 2019 in Mainz, the Central Committee of German Catholics (ZdK) dealt with the issue of the Synodal Path of the Church in Germany. With a clear majority, the Assembly voted to help shape this path constructively. The Committee and the Main Committee were instructed by the Plenary Assembly to continue the planning with the German Bishops' Conference in binding cooperation and under common leadership, to provide the necessary personnel and financial means for this and to ensure the networking of the representatives of the ZdK.

Pope Francis’ letter of 29 June 2019
Pope Francis wrote – for the first time in contemporary history – a letter “To the Pilgrim People of God in Germany”. This letter also takes up the concerns of the Synodal Path. The President of the German Bishops' Conference, Cardinal Reinhard Marx, and the President of the Central Committee of German Catholics (ZdK), Prof. Dr Thomas Sternberg, jointly commented on this letter.
What happens next?
The Synodal Assemblies will take place from 30 January to 1 February 2020 and from 3 to 5 September 2020 in Frankfurt/Main.