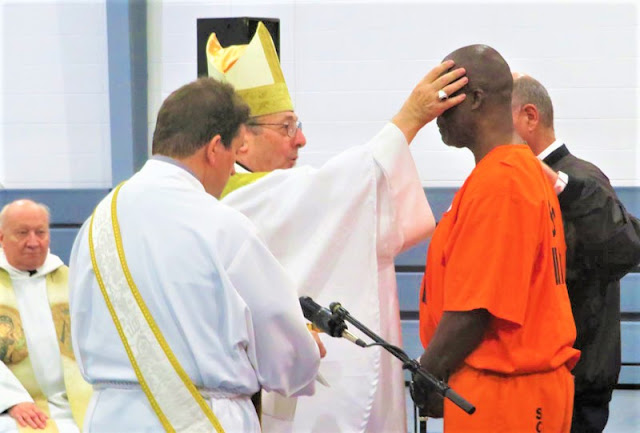 The Catholic Miscellany Greenville Deanery, South Carolina reports that the Diocese of Charelston Prison ministry led to baptism of inmates by bishop. In a report by Terry Cregar on January 14, 2020 it was noted that Bishop Robert E. Guglielmone celebrated the sacrament of baptism for inmates at Perry Correctional Institution near Pelzer on Dec. 10, 2019.
Five men received sacraments during a Mass led by Bishop Robert E. Guglielmone.

Father Rhett Williams said three of the inmates were baptized and all five received confirmation.

“Overall, it was a great Mass that involved many inmates, staff, and even guards who were present,” he said.


“So many loving, caring people attended to watch me being welcomed into the Church. I truly felt the spirit of God throughout the Mass,” said Timmy, one of the men receiving confirmation.


James, another inmate, described his confirmation as “the most important day of my adult life. The understanding of the role Christ plays in my life has taken new shape. I have come to love the Catholic faith, and the more I learn, the better my life becomes.”


A reception was held after the Mass, and the men were treated to Subway sandwiches and soft drinks provided by the prison ministry.

Mass is held at Perry every Thursday, with weekly Catechism classes led by Deacon Leininger or a lay volunteer.

The ministry has lay volunteers that rotate in and out from the local parishes, he said.

“Each week for Mass we have anywhere from eight to 12 guys, and about the same for classes,” Father Williams said.

Located 10 miles west of Fountain Inn, Perry is a maximum-security prison with around 1,000 inmates.
Edited from The Catholic Miscellany
Posted by Jesus Caritas Est at 3:47 PM