4 Catholic Bishops, critical of Duerte, Cleared of Sedition charges by Government in the Philippines 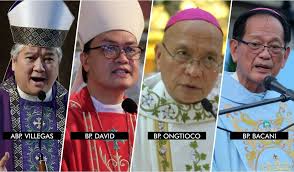 CBCP release:
“God knows everything,” said Archbishop Socrates Villegas after the dismissal of sedition charges brought against him and other church leaders.

They have steadfastly maintained their innocence, and “God knows all we think in our hearts,” he said.

“Now that the government officials have seen the falsity of the charges, what can we do but pray as I have always been doing. I pray even more,” Villegas said.

“I pray for those who concocted the calumnies and lies and wish them peace,” he said. “My revenge is forgiveness for my slanderers who relentlessly mock me.”

“I pray for those who have been charged, I know the Lord will turn your anxieties into hope. Do not be afraid,” Villegas added.

One of the 36 people charged, Bishop David hailed the development but admitted having mixed emotions about the DOJ decision that was made public on Monday.

The prelate said he is “happy” that they were cleared of the charges brought against them but also “sad” that the DOJ indicted two priests and nine others for the supposed ouster plot.

“I still hope and pray that the charges against them be also dismissed soon by the courts,” David said.

For Bishop Bacani, the no-probable-cause decision “was only right and long overdue”.

“I thank our lawyers and the panel of prosecutors for upholding the truth,” he said.

“I thank you for all your prayers and support,” Bishop Ongtioco also said.
Full Text Press Release from the CBCP - Bishops Conference of the Philippines