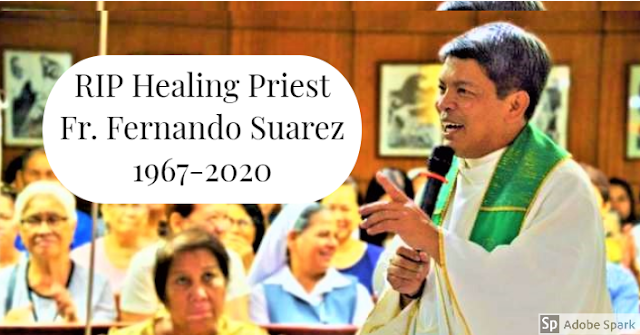 ABS-CBN News MANILA reports that the Filipino Catholic healing priest Fr. Fernando Suarez passed away on Tuesday at the age of 52. Suarez was playing tennis at the Alabang Country Club when he collapsed.

He was brought to the Asian Hospital Medical Center where he was declared dead at around 3 in the afternoon.

Fr. Fernando Suarez, collapsed and died of a heart attack, massive heart attack while he was playing tennis. This was during a yearly tournament for priests. All priests were participants.
According to Lifestyle, He first  realized  that he had the gift of healing when he was sixteen and he prayed over a lame woman he saw in sta. Cruz church. The woman sitting by the church door  and Fernando asked if she wanted to be prayed over. He laid his hand on her head and prayed for healing. When he opened his eyes, he was shocked to see the woman walking away. He kept this gift to himself afraid that people would think his crazy until he was ordained a priest in Canada where he entered the Congregation of the Companions of the Cross.

“My gift of  healing is from  God,” he would always tell the devotees. “I am but his instrument.”

When  he was informed of the decision of the Vatican to absolve him of the malicious accusations of sexual assault on two young boys supposedly committed six years ago in Illing, Mindoro, his reaction was, “God be praised!”  It was the Vatican’s  Congregacione per la Doctrina Della Fedde’s decision to declare him “Not Guilty.” The doctrine was signed by its secretary, Gacomo Morandi, Titular Archbishop of Cerveteri.

Suarez was survived by his mother and four siblings.

Though the priest had gout, Suarez had no history of heart problems, Siytangco said.
Unknown to many, Fr. Suarez has helped a group of rehabilitated ex-prisoners form a monastic congregation in Davao to help them spiritually. They are now known as the Contemplative Brothers of the Mary Mother of the Poor Foundation.

Suarez became popular in the Philippines and other countries for his healing Masses, attended by thousands who hope to be cured of their illnesses.

Despite his popularity, several bishops banned him from performing healing Masses in their respective dioceses for various reasons.

Aside from skepticism from bishops, Suarez also faced sexual abuse allegations. The Catholic Bishops' Conference of the Philippines' National Tribunal of Appeals submitted the complaint to the Vatican's Congregation for the Doctrine of the Faith on May 8, 2019. But the Vatican, in January, found him "not guilty" of these accusations.

"They should lift my ban," Suarez told ABS-CBN News. "Kung alam mo lang (If you only knew) what I went through," he added, citing the "ordeal of mental torture, calumny, gossips, especially among... bishops and priests."

Edited from ABS-CBN News Philippines
Posted by Jesus Caritas Est at 11:25 AM