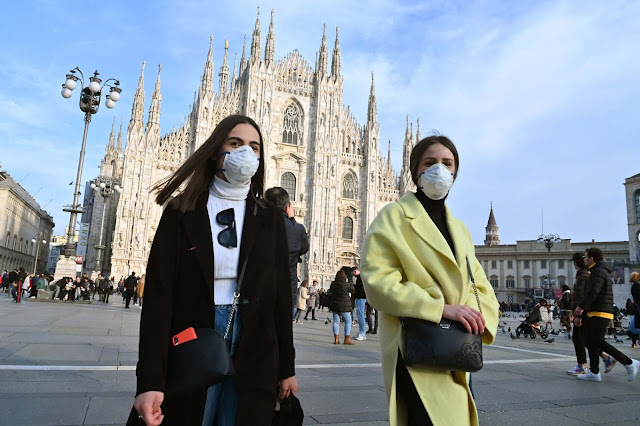 The director of the Vatican Press Room, Matteo Bruni, reported on the decision to postpone some events organized in closed places and with a significant presence of the public. For the WHO, the peak of infections in China has been reached but a potential "pandemic risk" remains for the world.  Latest statistics from the WHO: Globally 79 331 confirmed (715 new) China 77 262 confirmed (415 new) 2595 deaths (150 new) Outside of China 2069 confirmed (300 new) 29 countries (1 new) 23 deaths (6 new).
Certain "events scheduled for the next few days in closed places and with a significant influx of public" which, according to the director of the Press Office of the Holy See, Matteo Bruni, "have been postponed" inside the Vatican.
In addition, "dispensers with a hand sanitizer" have been installed in the offices in Vatican City.
Italian tax police officers set a road block in Casalpusterlengo, Northern Italy, Monday, Feb. 24, 2020.
Italy is now trying to prevent the spread of Europe's first major outbreak of the new viral disease with rapidly rising numbers of infections and a 7th death. Road blocks were set up in at least some of 10 towns in Lombardy at the epicenter of the outbreak, including in Casalpusterlengo.
Police manned checkpoints around quarantined towns in Italy's north on Monday and residents stocked up on food as the country became the focal point of the outbreak in Europe and fears of its cross-border spread.

Civil protection officials said at least 222 people had tested positive for the virus in Italy and that 7 people had died; all fatalities were elderly people in the two main clusters in Lombardy and Veneto. It was the highest number of cases outside Asia, and underscored the limits of Italy's prevention protocols, the most stringent in Europe.
Monday had spread to a half-dozen regions and prompted Austria to temporarily halt rail traffic across its border with Italy.

“These rapid developments over the weekend have shown how quickly this situation can change,” EU Health Commissioner Stella Kyriakides said in Brussels. “We need to take this situation of course very seriously, but we must not give in to panic, and, even more importantly, to disinformation.”

While Italian authorities cancelled soccer matches, Masses (churches) and closed schools, museums, theatres and even Venice's famed Carnival, they also sought to calm fears by noting the virus' low mortality rate. The six people who died with coronavirus were all elderly and several had other serious ailments.

Civil protection officials insisted that Italy was still a safe place to visit. Veneto regional president Luca Zaia lamented that he never imagined he would ever have to cancel Venice's Carnival - another economic blow to the famed lagoon city that already saw tourism plummet after last year's floods.

Italy, however, wasn't taking chances and effectively sealed off a dozen northern towns where more than 200 of the cases were found. On Monday, police wearing face masks manned checkpoints along the road into Codogno, southeast of Milan, where the first patient to test positive for the virus was hospitalized last week.

Residents wearing face masks and gloves lined up at supermarket to stock up on food, only to find out the market was still closed on orders of the mayor.


In the Lombardy capital of Milan, Italy's financial hub, the final two runway shows of Milan Fashion Week scheduled for Monday were cancelled.

A joint team from the World Health Organization and the European Center for Disease Prevention and Control were set to visit Italy.
Edited from CP24 - WHO - VaticanNews - CNA Asia - https://www.vaticannews.va/it/chiesa/news/2020-02/coronavirus-chiesa-italiana-vicina-persone-sole-e-anziani.html
Posted by Jesus Caritas Est at 6:13 PM