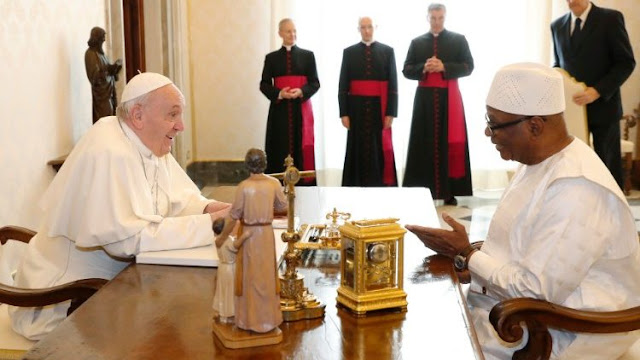 On Thursday, February 13, 2020 Pope Francis received in audience, in the Apostolic Palace, the President of the Republic of Mali, Ibrahim Boubacar Keita. The Vatican released a statement said that during the discussions,  the two leaders were pleased with good bilateral relations. They then focused on the situation in the West African country, with reference to humanitarian and security issues, endangered by religious radicalism and terrorism. Keita gave Pope Francis a traditional gift made by Malian mothers. The president said: “We feel that you are with Mali.” “Thank you very much.”
The pope gave the president a medallion depicting St. Martin de Porres giving his cloak to a poor man. Upon leaving, the pope said goodbye to the president, calling him “my brother,” and asked for his prayers. President Keita then met with His Eminence Cardinal Secretary of State Pietro Parolin, accompanied by His Excellency Archbishop Paul Richard Gallagher, Secretary for Relations with States.
Posted by Jesus Caritas Est at 12:04 PM