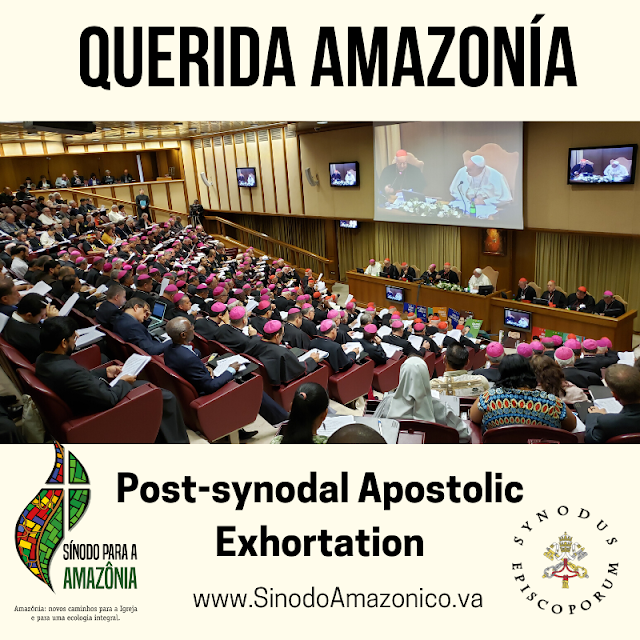 Querida Amazonia: the Pope’s Exhortation for a Church with an Amazonian face
The Post-Synodal Apostolic Exhortation on the Amazon Region has been published. The document traces new paths of evangelization and care for the environment and the poor. Pope Francis hopes for a new missionary thrust, and encourages the role of the laity within the ecclesial community.
Shortened from a Vatican News report By Alessandro Gisotti


Significance of the Apostolic Exhortation
In the first two points (2-4), the Pontiff explains “the significance of this Exhortation”, enriched with references to documents of the Episcopal Conferences of the countries that make up the Amazon region, as well as of poetry written by poets connected to the Amazon. He emphasizes that he desires “to offer my own response” that the Synod evoked in him and explains that he does not intend to substitute or duplicate the Final Document which he invites us to read “in full”. Pope Francis prays that the entire Church might allow itself to be “enriched and challenged” by it and that the Church in the Amazon might strive “to apply it”.

The Pope recalls that Benedict XVI had already denounced “the devastation of the environment and the Amazon”. The indigenous peoples, Pope Francis warns, suffer a “subjection” on the part of both the local and outside powers. According to Pope Francis, the economic operations that fuel devastation, killing and corruption merit the name of “injustice and crime”. With John Paul II, he reiterates that globalization must not become a new version of colonialism.

A social dream: that the poor might be heard regarding the Amazon’s future
In the face of so much injustice, the Pope asks that we “feel outrage” and that we “beg forgiveness” (15-19). According to Pope Francis, “networks of solidarity and development” are needed, and he requests everyone to commit themselves, including political leaders. The Pope then dwells on the theme of “a sense of community” (20-22). He recalls that for the Amazonian peoples, human relationships “are steeped in the surrounding nature”. Thus, he writes, they experience a real “uprootedness” when they are “forced to migrate to the cities”.

A social dream:  that the Amazon region become a place of dialogue
The last part of the first chapter is dedicated to the “broken institutions” (23-25) and to “social dialogue” (26-27). The Pope denounces the evil of corruption which poisons the State and its institutions. He also expresses the hope that the Amazon might become “a place of social dialogue”, first of all, with the least, and that the voice of the poor might be “the most authoritative voice” in the Amazon region.

A cultural dream: taking care of the Amazon polyhedron
The second chapter is dedicated to the “cultural dream”. Pope Francis makes it immediately clear that “to promote the Amazon region” does not mean “colonizing it culturally” (28). He thus uses an image that is dear to him – “the Amazonian polyhedron” (29-32). “Postmodern colonization” needs to be combatted, he says. For Pope Francis, “caring for roots” is urgent (33-35). Citing Laudato si’ and Christus vivit, he emphasizes that the “a consumerist vision of human beings” tends to “have a leveling effect on cultures” and this has an effect above all on young people. The Pope asks young people to “take charge of your roots”, and to “recover their damaged memory”.

A cultural dream: an intercultural encounter rather than a closed “indigenism”
The Apostolic Exhortation then dwells on the “intercultural encounter” (36-38). Even the “supposedly more developed cultures”, he observes, can learn from peoples who have “developed a cultural treasure, interacting with nature”. Diversity should, therefore, not be “a wall” but “a bridge” which rejects “a completely enclosed ‘indigenism’”. The last part of the second chapter is dedicated to the theme of “endangered cultures, peoples at risk” (39-40). In any project for the Amazon region, the Pope’s recommendation is that “there is a need to respect the rights of peoples”.

An ecological dream: to unify caring for the environment and caring for people
The third chapter proposes “an ecological dream” and is the chapter that is most directly connected with the Encyclical Laudato si’. In the introduction (41-42), the fact that there exists a close relationship between the human being and nature in the Amazon is underlined. Pope Francis emphasizes that taking care of our brothers and sisters as the Lord takes care of us is “the first ecology that we need”. Caring for the environment and caring for the poor are “inseparable”. Pope Francis then directs his attention to “the dream made of water” (43-46).
An ecological dream: sustainable development in the Amazon region
According to the Pope, it is urgent that “the cry of the Amazon region” be listened to. He recalls that the health of the planet depends on its health. There are, he writes, powerful interests which are not only local interests, but are even international. The solution is not, therefore, “internationalizing” the Amazon region; what needs to grow is “responsibility on the part of national governments”. Sustainable development, he continues, requires that the people living there be always informed about projects that concern them. In this regard, he hopes that “a legal framework” with “clear boundaries” will be created.


An ecclesial dream: to develop a Church with an Amazonian face
The final chapter is the longest and is dedicated “more directly” toward pastors and members of the Catholic faithful. Its focus is the “ecclesial dream”. The Pope invites us to “develop a Church with an Amazonian face” through a “great missionary proclamation” (61), a “message that needs to be heard in the Amazon region” (62-65). A “social message” is not enough according to the Pope. These peoples have “a right to hear the Gospel”, otherwise, “every ecclesial structure would become” an NGO.

A substantial portion is then dedicated to inculturation. Referring to Gaudium et spes, he speaks of “inculturation” (66-69) as a process which brings “to fulfilment in the light of the Gospel” the good that already exists in the Amazonian cultures.

An ecclesial dream: a renewed inculturation of the Gospel in the Amazon region
The Pope then turns his gaze more in depth to the “paths of inculturation in the Amazon region” (70-74). The values present in the indigenous communities, he writes, need to be taken into account “in the process of evangelization”. Then, in the next two paragraphs, he dwells on “social and spiritual inculturation” (75-76).
An ecclesial dream: accessibility of the Sacraments to everyone, especially the poor
The Apostolic Exhortation then indicates the “starting points for an Amazonian holiness” (77-80) which should not copy “models imported from other places”. He emphasizes that “it is possible to take up an indigenous symbol in some way, without necessarily considering it as idolatry”. It is possible to use “a myth charged with spiritual meaning”, he adds, without necessarily considering it to be “a pagan error”.

An ecclesial dream: inculturating the liturgy
Another significant passage in Querida Amazonia is on the inculturation of the liturgy (81-84). The Pontiff notes that the Second Vatican Council had already called for an effort “to inculturate the liturgy among indigenous peoples”. In addition, he recalls in a footnote that during the Synod “a proposal to develop an ‘Amazonian rite’ ” emerged. The Sacraments, he states, “should be accessible, especially for the poor”. The Church, he adds, recalling Amoris laetitia cannot transform itself into a “toll-house”.

An ecclesial dream: sending missionaries to the Amazon region
Connected to this is the theme of the “inculturation of forms of ministry” (85-90) to which the Church must give a “courageous response”. According to the Pope, “a more frequent celebration of the Eucharist,” must be guaranteed. In this regard, he reiterates, it is important to “determine what is most specific to a priest”. The answers, as one finds, is in the Sacrament of Holy Orders which enables the priest to be the sole presider over the Eucharist.

An ecclesial dream: fostering the involvement of the laity in the communities
After speaking about the Sacraments, Querida Amazonia dwells on “communities filled with life” (91-98) in which the laity must assume “important responsibilities”. For Pope Francis, in fact, it is not a matter “of facilitating a greater presence of ordained ministers”. He calls this a “narrow” objective if it does not succeed in awakening “new life in communities”. Thus, new “lay services” are called for. Only through an “active involvement of the laity”, he reiterates, can the Church respond to the “challenges in the Amazon region”. According to Pope Francis, consecrated persons have a special role to play. At the same time, he reminds us of the role of the base communities who have defended social rights. In particular, he encourages the activities of REPAM and “itinerant missionary teams”.

An ecclesial dream: new places for women, but without clericalization
A part of the document is dedicated to the “strength and gift of women” (99-103). Pope Francis recognizes that in the Amazon region some communities are only sustained “because of the presence of strong and generous women”. He then cautions against reducing “the Church to her functional structures”. If that were the case, women would only be given a role insofar as they had access to Holy Orders. According to Pope Francis, the clericalization of women must be rejected, and instead, a feminine contribution that allows the “tender strength of Mary” to be present should be accepted. He thus encourages the creation of new feminine services which – with the public recognition of the bishop – allow their input to affect decisions taken in the community.

An ecclesial dream: Christians fighting together to defend the poor in the Amazon region
According to the Pope, “expanding horizons beyond conflicts” (104-105) is a must as well as allowing the Amazon region to challenge us to “transcend limited perspectives… mired in partial approaches”. The fourth chapter then ends on the theme “ecumenical and interreligious coexistence” (106-110). The Pope invites believers to “find occasions to speak to one another and to act together for the common good”.
Entrusting the Amazon region and its peoples to Mary
Pope Francis concludes Querida Amazonia with a prayer to the Mother of the Amazon Region (111). “Mother, look upon the poor of the Amazon region”, he prays, “for their home is being destroyed by petty interests…. Touch the hearts of the powerful, for, even though we sense that the hour is late, you call us to save what is still alive.”
Shortened from a Vatican News report By Alessandro Gisotti