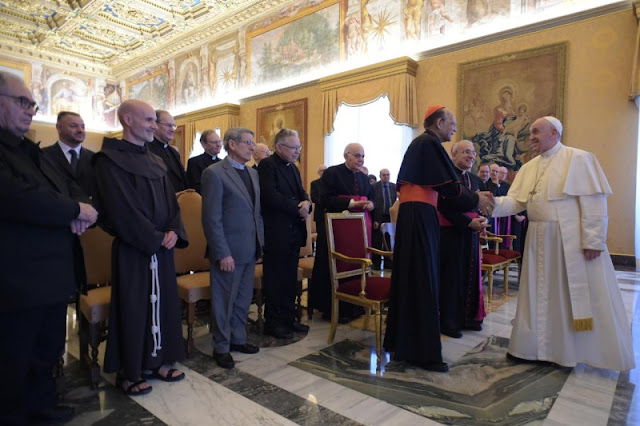 
Cardinals,
dear Brothers in the episcopate and in the priesthood,
dear brothers and sisters!

I am delighted to welcome you today for the first time, at the end of your plenary session. I thank the President for recalling the spirit in which your work took place, which had as its subject the outline of the revision of Book VI of the Code of Canon Law, De sanctionibus in Ecclesia. This meeting offers me the opportunity to thank you for your service which, in the name and with the authority of the Successor of Peter, you carry out for the benefit of the Churches and Pastors (cf. Christus Dominus, 9). The specific collaboration of your Dicastery is defined in the Pastor bonus Constitution (see articles 154-158), which summarizes it in aid to the legislative function of the Supreme Pontiff, Universal Legislator, in the correct interpretation of the laws issued by him, in helping other Departments in the field of canon law, as well as in supervising the legitimacy of normative texts issued by legislators under the supreme authority.

The Pontifical Council for Legislative Texts, through various initiatives, also undertakes to offer its help to the Pastors of the particular Churches and to the Episcopal Conferences for the correct interpretation and application of the law; more generally, in spreading knowledge and attention towards it. It is necessary to reacquire and deepen the true sense of law in the Church, the Mystical Body of Christ, where the pre-eminence is of the Word of God and of the Sacraments, while the juridical norm has a necessary but subordinate role and in the service of communion. In this line, the Dicastery should help to make us reflect on a genuine juridical formation in the Church, which will make us understand the pastorality of canon law, its instrumentality in order to the salus animarum (can. 1752), its need out of respect for virtue of justice, which must always be affirmed and guaranteed.

In this perspective, Benedict XVI's invitation in the Letter to the Seminarians is very timely, but valid for all the faithful: "Learn also to understand and - I dare say - to love canon law in its intrinsic necessity and in the forms of its practical application: a society without rights would be a society without rights. Law is a condition of love "(n. 5). Making known and applying the laws of the Church is not a hindrance to the presumed pastoral "efficacy" of those who want to solve problems without the law, but a guarantee of the search for solutions that are not arbitrary, but truly just and, therefore, truly pastoral. By avoiding arbitrary solutions, the law becomes a valid bulwark in defense of the least and the poor, the protective shield of those who risk falling victim to the powerful in turn. We see today in this context of chopped world war, we see as always there is the lack of law, always. Dictatorships are born and grow without rights. In the Church this cannot happen.

The theme being studied by your Plenary also goes in this direction, to emphasize that criminal law is also a pastoral tool and as such must be considered and accepted. The Bishop must be increasingly aware that in his Church, of which he is made pastor and head, he is therefore himself also a judge among the faithful entrusted to him. But the role of judge always has a pastoral imprint in that it is aimed at communion among the members of the people of God. This is what is prescribed in the current Code: when the Ordinary found that other ways dictated by pastoral concern were not It is possible to sufficiently obtain the reparation of the scandal, the re-establishment of justice, the amendment of the offender, only then must he initiate the judicial or administrative procedure to inflict or declare the appropriate penalties to achieve the purpose (see can. 1341). From this it can be deduced that the penal sanction is always the extreme ratio, the extreme remedy to resort to, when all the other possible ways to obtain regulatory compliance have proved ineffective.

Contrary to that provided for by the state legislator, the canonical penalty always has a pastoral meaning and pursues not only a function of respect for the order, but also the reparation and above all the good of the guilty person himself. The reparative aim is aimed at restoring, as far as possible, the conditions preceding the violation that disturbed the communion. In fact, every crime affects the whole Church, whose communion was violated by those who deliberately attacked it with their own behavior. The aim of the recovery of the individual emphasizes that the canonical penalty is not a merely coercive tool, but has a distinctly medicinal character. Ultimately, it represents a positive means for the realization of the Kingdom, for rebuilding justice in the community of the faithful, called to personal and common sanctification.

The work of revising Book VI of the Latin Code, which has involved you for some years and with this Plenary comes to an end, is in the right direction: updating the penal legislation to make it more organic and in line with the new situations and problems of the current socio-cultural context, and together offer suitable tools to facilitate their application. I urge you to continue tenaciously in this task. I pray for this and I bless you all and your work. And please don't forget to pray for me, because I also have to be a judge. Thank you.
Full Text + Image Vatican.va - Unofficial Translation
Posted by Jesus Caritas Est at 8:52 AM