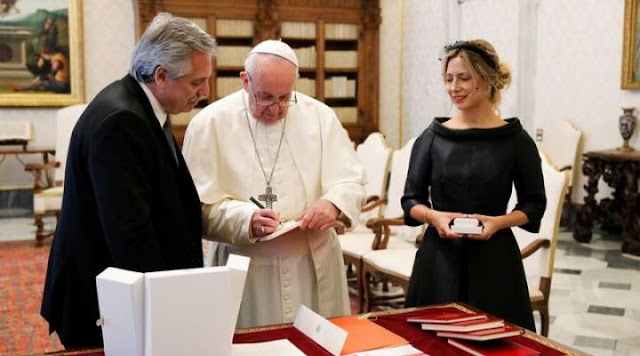 Jan. 31/20 - This morning in the Vatican Apostolic Palace, His Holiness Pope Francis received in audience His Excellency Mr. Alberto Fernández, president of the Argentine Republic, who subsequently met with His Eminence Cardinal Secretary of State Pietro Parolin, accompanied by Monsignor Mirosław Wachowski, Under-Secretary for Relations with States.

During the cordial discussions, satisfaction was expressed over the good relations that exist between the Holy See and the Argentine Republic. Afterwards, the situation in the country was examined, with particular reference to problems such as, the economic-financial crisis, the fight against poverty, corruption and drug trafficking, efforts to build up society, and the protection of life from conception. In this context, it was noted the significant contribution of the Catholic Church in favour of all in Argentine society, especially the more vulnerable sectors of the population.

Discussions continued and focused on themes of common interest regarding the regional context.