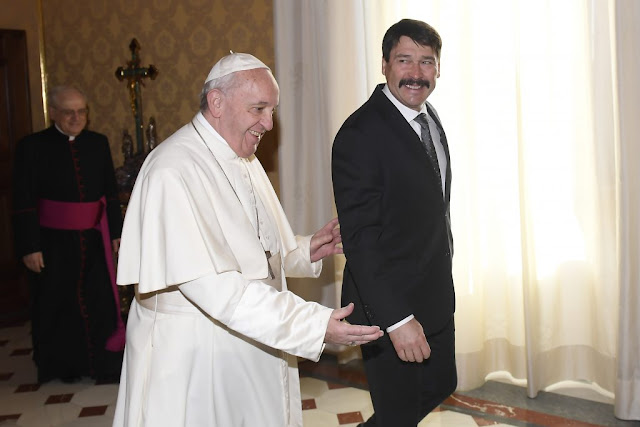 Pope Francis met privately with the President János Áder of the Republic of Hungary.

János Áder, President of Hungary, invited the pope to Hungary and discussed the 52nd International Eucharistic Congress scheduled to take place in Budapest in September 13-20.

A Holy See Press Office statement said talks between the Pope and the President took place in the Secretariat of State on Friday, Feb. 14, 2020.

They also spoke of social justice, the reception of migrants, promotion of the family, safeguarding creation, the present and the future of Europe.

The president gave the pope a sculpture of a monk in prayer. It's called “Meditation,” and was made by Josef Damko. President Áder subsequently, met Vatican Secretary of State, Cardinal Pietro Parolin and the Under-Secretary for Relations with States, Monsignor Miroslaw Wachowski.
Posted by Jesus Caritas Est at 10:33 AM