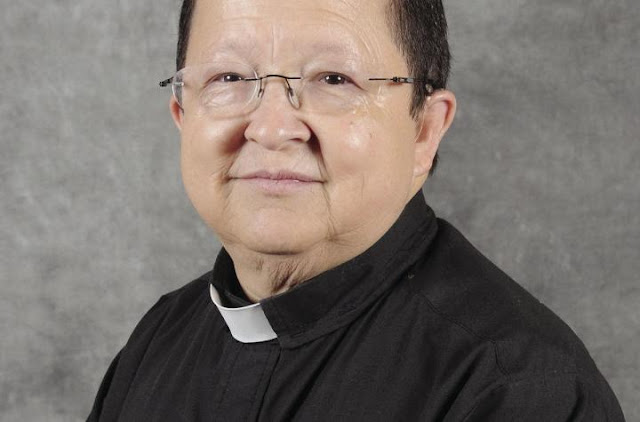 Father Raúl Alberto Valencia died in a car accident on Friday, February 7, 2020, the Roman Catholic Diocese of Tucson said in a statement.

"Father Raul Valencia, pastor of Santa Monica Parish in Tucson, was in a tragic car accident today and has died." "The accident occurred as Father was driving to Nogales to visit family.

"Of course, this news comes as a tremendous shock to his family, parishioners, and friends."

"Department of Public Safety officers informed his family that death was instantaneous."
The driver who hit his car died on the scene.

The Funeral Mass was held on Tuesday, Feb.11, at 10 a.m. at Sacred Heart of Jesus Parish, in Nogales, Arizona; Bishop José Leopoldo González González, bishop of the Diocese of Nogales, Sonora, Mexico, was the Mass celebrant. His burial was at Holy Hope Cemetery in Tucson.
Biography of Fr. Raul from the Diocese:

Father Valencia Garcia was 6o.  He had been pastor at St. Monica Parish since July 1, 2011. It was his second assignment to the parish. St. Monica’s had been his first assignment as a newly-ordained priest in July 2003. That lasted until Oct. 14, 2004 when he was assigned to St. Jude Thaddeus in San Luis, Arizona.  He ministered at St. Jude from November 2004 until he was assigned to St. Monica Parish in 2011.

Father Valencia Garcia, a native of Nogales, Sonora, Mexico, was born on July 28, 1959.  He attended school at Colegio Fray Pedro de Gante School in Nogales, Sonora and went on to attend the Instituto Technologico de Nogales, (Sonora) from 1976 to 1979.  He then attended the Universidad Autonoma de Guadalajara in Guadalajara, Jalisco, Mexico, and studied there from 1980 to 1985.

He also received his Doctor of Dental Surgery, (DDS) from the Universidad Autonoma de Guadalajara and operated his own general dentistry practice for 11 years in Nogales, Sonora, Mexico, from 1986 to 1997.

From September 1997 to July 1998 he attended the Seminario Juan Navarrete y Guerrero, also referred to as the Seminario de Hermosillo.  In 1998, he began attending Assumption Seminary in the Archdiocese of San Antonio, Texas, and completed his studies there in 2002. He served an internship through Assumption and the Oblate School of Theology and under the supervision of the Diocese of Tucson Vocations Office.

Father Valencia Garcia was ordained to the priesthood for ministry in the Diocese of Tucson on June 7, 2003.

Then Bishop Gerald F. Kicanas appointed Father Valencia as liaison with the Encuentros Matrimoniales for a three-year term beginning in April 2007.